That's from Seinfeld's "The Glasses" where George loses his glasses and thinks he saw Jerry's woman du-jour making out with his cousin.  One minute George can see a dime across the room while squinting and the next he's eating an onion out of the fridge thinking it's an apple.

One minute we're getting beat at home by the Timberwolves and the next we're blowing the Hornets out of the water on the road.

It feels a whole lot better spotting dimes than it does eating onions though.

We haven't seen too much of this picture either lately, even when the Jazz have been winning.  It was great to see Deron bust that out in the first quarter as the Jazz had arguably one of their best quarters of the season as they took it to the Hornets, 41-19.

Utah shot 19-25 from the field (76%) and reminded me of the line from the Basketball John song,

He made every three point shot he made

Almost everyhing the Jazz threw up went in.  Ronnie B got things going by hitting the first two shots of the game to beat the shot clock both times.  He would go on to make all 6 of his shots in the quarter.

The game was pretty neck and neck until about 6 minutes in the first when the Jazz pulled away.  Led by Deron's 8 assists (in the quarter), the Jazz carved up the Hornet's D with the execution that we're used to seeing from the team.  Don't let the fact that NOLA was playing with a diminished team tarnish what the Jazz did.

In the game thread, I posted the text, "Give us something..."  I just wanted to see a little life from the Jazz.  Something that showed that they might still be able to make some noise in the playoffs and that they weren't completely dead.

Whatever's been lacking the past month or so came back all at once for this game.  The Jazz didn't let up in the second quarter as they built a 27-point lead at the half.

Thank in large part to that lead there was a third quarter bend, but not a third quarter collapse.  The Hornets, I mean David West, finally found his shot, going 5-5 for 10 points as the Hornets closed the lead to just 9.  Following  Stojakovic three-pointer, Chris Paul made two free throws to make the score 83-74.

But something weird happened.  Brevin Knight came in and not only held the lead, but  helped pushed the lead up to 18.  Deron got a breather from the 2-minute mark in the third and didn't return until there were just 6-minutes left in the game.

Knight's biggest contribution of the season may have been the offensive foul he drew on Chris Paul to give CP3 his 5th of the game.  The call was borderline and it was weird to see the call go against Paul.  That sent CP to the bench and in effect squelched the any comeback.

The Jazz wisely and veteranly (just made that up) worked the last 6 minutes to perfection.  They slowed things down, got good shots, and played some great D.

They didn't shoot well in the second half, but they had only 4 turnovers (0 in the fourth), while forcing 7 against the Hornets in the last period.

What I loved most about this game was exponential leap in intensity between Chris Paul and Deron Williams.  Their two scrums on the floor for loose balls highlighted just how intense this game was for the two.  They've always played each other hard but I haven't seen them go at each other like this.  Because of the boost Deron seemingly gets from playing Paul, I'm enforcing an immediate policy:  Every opposing PG must wear the Chris Paul mask at all times, 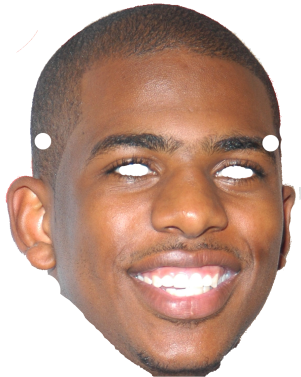 Couldn't something like this be molded like the one the Rip Hamilton wears?  Instead of being clear, it would have Paul's mug on it.

So what does this all mean?  It means we finally got a win on the road against a +.500 team.  I'll be reserving judgement until after we play the Mavs and Spurs to see if we've turned any kind of corner here.  But this game had to have brought you back off of the ledge at least a step or so.  Let's look at some of the individual stats:

Between having no NBA today and the three-day layoff, it's going to seem like an eternity before we play Wednesday.  Too bad Dallas doesn't play tomorrow.
Video
Finally!  The NBA lets you embed now.  Welcome to 2009!  Also, I've been meaning to start recording video again (long boring story on why I couldn't) but decided to enjoy the nice weather here in Utah after the game instead.  So BBJ video will return.