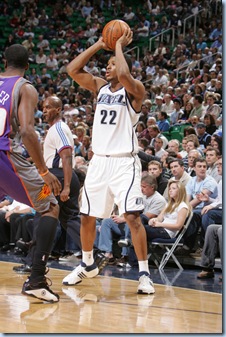 
Morris Almond was picked in the 20ies by the Utah Jazz two drafts ago with the hopes of being a sweet shooting guard of the prototypical size (6'6) and the actual ability to make his own shot, get to the line, or rain jumpers. A four year player at Rice, Almond had the pedigree of a mature player who could make plays on offense. At the time of his drafting Utah was going to war at shooting guard with a) elderly point guard Derek Fisher, b) European enigma Gordan Giricek, c) long term project C.J. Miles and d) an unused rookie with a broken shooting arm, Ronnie Brewer.

Since that time and now the writing is on the wall for Almond: he's gone by his choice. And I don't blame him.

Fisher was let out of his contract with the Jazz, so that left the starters spot up for grabs. C.J. Miles (bereft of a contract) decided to skip his 2nd Summer League in a row and actually accepted an offer from Oklahoma City. Ronnie Brewer displayed a much more consistent jumper (something he worked on all summer long) and got the starting job. Giricek was traded midseason for Kyle Korver -- whatever strong shooting niche Almond had over the other guys (Brewer has athleticism and defense, Miles has athleticism and ball handling) became an after thought as a guy who shared the same strengths (and was better at them) came to the team.

This past season Almond was not even sent down to the NBA-DL long enough to become a fixture on offense there -- which is shady in its' own devious little way. In effect, this season was a complete waste for Almond -- who didn't get a lot of time in the NBA, nor did he get a chance to audition for other teams that much in the DL. A look at his NBA career validates the opinions of haters everywhere. People just don't think that he's an NBA player. I am clearly in the minority.

In his Rookie campaign Morris was only playing in garbage time, and no one was running anything. This season there were enough injuries where Old Mr. Scrooge Jerry Sloan allowed him to actually play on the floor with guys who were better than he was. Getting set up by guys like Deron and AK while the defense let him get open must have been an amazing change of pace for him since the double and triple teams he routinely faced at Rice and down with the Utah Flash. Over the last two seasons in the NBA his FG% increased by 13.7%. In fact, not being a rookie helped a lot as all of his percentages increased.

Long held opinions believe that Almond is only a scorer. He was more than just a scorer in the NBA this season though. There is no way to accurately measure how much better he got on the per game basis in terms of blocks and steals (because as a rookie he didn't play enough to really register any significant defensive stats in garbage time), but as far as rebounding went, he increased his RPG by +1.2. His APG did not increase (even though his MPG did), but this is easily explained with his role. Last season in the NBA he was the only guy in XTREME garbage time who could do something with the ball -- this season he was actully only touching the ball in situations where he was supposed to shoot it. (e.g. being set up by Deron Williams)

He became a more efficient scorer who hit the glass and did more with less time. Isn't this what people wanted from him? Well, the other big thing was turn overs and he managed to knock down his turn overs per game from 3.1 to 2.2 -- which is pretty significant. Over all Almond did improve (who would have thunk that a soph would be better than he was as a rookie)! He was able to crack a spot with the Jazz early in the season and get some playing time. Even I didn't know that Almond played more than 12 mpg 12 times this last season. In those games he averaged 6.4 ppg, 2.8 rpg, 0.5 apg and a combined 0.55 blocks and steals per game.

Just  as a point of reference in CJ's 3rd season (the one where he averaged 12 mpg) he was able to get 5.0 ppg, 1.3 rpg, 0.9 apg, and 0.6 combined blocks and steals per game. Just to make sure everyone is on the same page here, those are the stats that were used in part to justify the multi-year restricted free agent contract that the Jazz matched in the last off-season.

If you think it's unfair to judge CJ's 3rd season in the NBA with a selection of games Morris played 12+ mpg in, during his 2nd season . . . well . . . just look at how their two sophmore seasons look stacked against each other (both players played 10 mpg in their soph seasons). Morris is clearly the better scorer, rebounder and shot blocker -- while CJ a better distributor and steals guy.

Basing a comparison of the two purely on stats is silly though -- Almond isn't nearly as athletic and surely can't dunk as well as CJ can. Similarly, CJ looks more and more comfortable as a slasher -- while Morris is a traditional shooting guard who can take and make the type of shots guys like Reggie Miller and Richard Hamilton shoot. Obviously age and potential are on CJ's side -- but how long can you wait for young players to 'become' who we hope them to be? I feel that CJ has the potential to be a solid 3rd option on offense, but right now -- just looking at offense -- Morris is probably a much more reliable 4th option. Potential vs. Production comes into play here . . . and all I can remember is CJ bricking open jumper after open jumper after the All-Star break while Almond was draining jumpers all the way into the finals of the NBA D League season.

Apples to oranges of course . . . but the Jazz made up their mind on Morris early in October when they decided against the team option to pick up his 3rd year of his Rookie contract. There's no place for Morris Almond on the Jazz right now.

Funny how the team that's been struggling to get a pure shooting guard through the draft all these years (Lewis -- no confidence, Stevenson -- no conscience; Pavlovic -- slasher; Snyder -- home invasion; Miles -- too young; Brewer -- no jumpshot) decided to chase off a guy who'll make it in the NBA on some team that wants a guy who can make open shots.

When you are drafting a guy in the 20ies in the draft you're not drafting an impact player -- or even a guy you can figure out in 34 NBA games in two seasons. You're drafting a guy who has some limitations to his game -- but still has a specialty or two that can help a team. Almond makes shots -- and something that's really under the radar is the fact that dude really gets to the line. Our offense seems to rely on getting to the line 35+ times a game, and Almond has done just that in his professional career. This season along Almond was able to get to the line at LEAST 4 times in each of his 12+ mpg games against the Cavs and the Heat. Almond went through a few stretches early this last season where he went to the line over 10 times in over 3 games.

Yeah, our 4th string SG is a guy who gets respect from the refs, even though fans of his own team (or even his coaches) don't give him respect. Which is a big part of why I say Free Mo Almond. Utah liked him enough to draft him -- too bad they didn't find time to play him. He's not the perfect player, but he's still a guy I'll root for in the NBA. Sadly, it's just going to have to be watching him play in something other than a Jazz jersey.