David Locke takes over as play-by-play announcer for the Jazz from Hot Rod Hundley.

Share All sharing options for: David Locke takes over as play-by-play announcer for the Jazz from Hot Rod Hundley.

So that pic doesn't match quite with this one when Hundley called his first games with the Suns: 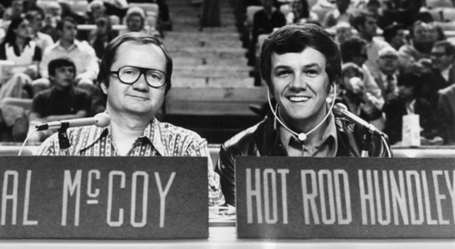 Looks like David Locke will take over play-calling duties from Hot Rod Hundley.  The announcement made today was probably to be expected.  Locke filled in for Hot Rod in Toronto last season and a few statement by Locke have hinted as much.  I guess that Toronto game as his interview.  Here's some of those calls:

Those are large footsteps he has to fill.  Hundley has been the only voice the Jazz and fans have known.