John Stockton - Induction into the Basketball Hall of Fame

Share All sharing options for: John Stockton - Induction into the Basketball Hall of Fame 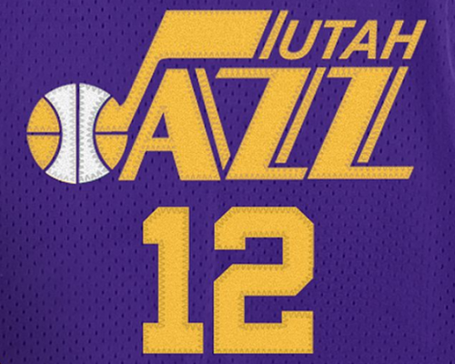 And then the tv announcer
He took the microphone in his hand
And he said, ladies and gentleman
I want to introduce to you
The best point guard in all the world,
In all the nba, in all the universe

I don't know why this part of a silly parody song about John Stockton still gives me chills when I hear it.  As you can see, I lifted the name of my former blog from the title of this song and used this line for one of my running posts.

He provided many more chilling moments for not only Jazz fans, but basketball fans.  I'm not sure how you cram 19 years  into a few paragraphs, but here it goes.

Maybe if we had sites like nbadraft.net and draftexpress.com in the early 80s, maybe fans wouldn't have booed when the Jazz picked Stockton.  Outside of a handful of NBA teams and scouts, nobody knew anything about him.  Frank Layden and company were so afraid of another team drafting him first, they didn't talk about him at all.  I imagine that once they made up their mind to draft him, they probably didn't even talk about it amongst themselves lest they jinx it.

So what would you have done when the Jazz announced they were picking a 6' 1" , 170 lb soaking wet PG from some unknown northwest college?  And remember, the Jazz already had a pretty good point guard at the time in Rickey Green.

The Utah Jazz would never be the same.

Stockton impressed from the get-go.  He was a hit in training camp and in the pre-season.  He played in all 82 games his first season, starting 5 of those when Green couldn't go.  He would continue the next three seasons as the backup PG.  But in 1988, Rickey Green was selected by the Charlotte Hornets in the expansion draft and the reins to the team were turned over to Stockton.

Immediately he jumped to be among the elite players in the league.  In his first season as a starter, Stockton led the league in assists with 1,128.  That would start a run of five straight seasons of 1,100+ assists.  The 1,100 assist mark has only been reached by one other player in NBA history, Isiah Thomas, and that was just one time.  Those 5 years produced 5,670 assists.  That alone would have put him at #33 on the all-time list.  He would lead the league in assists for 9 straight years, a league record.

His first year in the league was Utah's second trip to the playoffs.  You have players that play their whole careers trying to land with a team that will get to the playoffs but come up short.  Stockton on the other hand never knew a season without a post-season trip.

The early 90s was when the Jazz moved from being a very good team to becoming one of the top teams in the league.  Starting with the 1990-91 season, the Jazz averaged 56 wins over the next 11 years (1999 season prorates out to 60 wins).  After several roller-coaster years that saw the Jazz go to the Western Conference Finals only to be bounced in the first round the next year, the Jazz finally got their chance in 1997.

"John Stockton sends the Utah Jazz to the NBA finals!"

You've no doubt heard that line many times.  In Utah, that sound bite is played as part of radio talk show hosts' intros over and over again.  And it never gets old.

That call came of course as the Jazz beat the Rockets in Houston on a last-second three pointer by #12.  That one shot though is normally all that you see.  The thing is though, that shot was just the cherry on top of what Stockton had done in that fourth quarter and primarily the last 2 minutes of the contest.

With 1:47 left on the clock, the Bryon Russell had just hit a three-pointer to bring the Jazz within 4, 98-94.  What you don't usually see is how Stockton took over that game late and single-handily sent the Utah Jazz to the NBA Finals.

If players were given championships because they deserved it, Stockton and the Jazz would have gone on to win back-to-back titles.  We won't get into the controversy from those finals appearances against the Bulls and all the shoulda/coulda talk.  Stockton wouldn't make any excuses either.

While the Jazz would go on to the playoffs for the next five seasons, they never really made another threat at the title.  In Stockton's final time on the floor, the Jazz were being unceremoniously eliminated by the Kings in the 2003 playoffs.  Those were some great Kings fans.  I only wish he could have ended his career at the Delta Center:

Once again, if we talk about deserving, Stockton deserved to go out on a much better note than that.  But he played the last minutes of that game no different than he had played the previous 54,000+

When the dust settled, Stockton's final numbers were staggering.  15,806 career assists.  3,265 career steals.  Both records of course.  And both of those records are up there with the most hallowed in sports.  They're not likely to be approached for a very long time, if ever.

For the last 6 years of his career he started playing about 5-6 minutes less per game to keep his legs fresh.  His number dropped a bit, but his Per 36 and other stats showed that he didn't really have a drop-off.  Meaning at age 40, he was still putting up 10 assists per game Per 36, the same as when he entered the league.

Besides his records, clutch shooting, and being one of the smartest players in the league, Stockton will probably be remembered by most as one of the toughest, most durable players ever.  His longevity came despite setting the most tenacious picks in the league every night.  Some would call him dirty.  That's what you have to do when you have no other explanation as to why you keep getting your lunch handed to you by a guy that is 6" shorter than you and at least 50 pounds lighter.

For Jazz fans, he will be the standard for which all other point guards, better yet, for which all current and future Jazz players will be held to.  We won't settle for anything less than the hustle and dedication that John brought every night.

And for the league and basketball at large, he's nothing short of the best PG to have ever played the game.