From the official release from the Jazz,

Utah Jazz general manager Kevin O’Connor announced today that veteran forward Matt Harpring will not participate in training camp or the preseason and will miss the start of the NBA regular season.  Due to ankle and knee injuries, the 11-year NBA veteran is physically unable to participate in camp or the preseason at this point and his status will be re-evaluated in six weeks.

Maybe a CBA expert can weigh in on this.  Harp doesn't have to retire.  But if he's physically unable to perform, can the Jazz still collect on insurance?  Is there anything the Jazz can do here if they can't trade him or do they just have to bite the bullet?

And I thought I had read a while ago that Matt's contract this year was only partially guaranteed based on games played, etc but can't find anything on it now.   Also, if he's traded, the team receiving him may just buy him out as well or release him.

UPDATE, should have read Siler first,

There's been a lot of questions all summer about the financial implications of Matt Harpring's status. To the best of my understanding, here's the breakdown. For starters, Harpring's $6.5 million salary for 2009-10 became fully guaranteed midway through last season.    Although there were injury provisions in his contract, they were all related to Harpring's surgically repaired right knee. He missed exactly zero games for knee-related reasons, so his salary became guaranteed after the Jan. 31 game in Portland.

Siler also goes on to state that the Jazz would have to still sign someone else should Harp retire or not be able to play.  With the luxury tax situation, that of course would mean double.  But if they're able to recoup some from insurance, then it won't be that big of a hit financially.

My money is still on him getting traded or being bought out and staying on with the Jazz in a coaching role.

@lockedonsports linked to this yesterday and talked about it on his show.  Going based on Win Shares, it has the Jazz just behind the Lakers in the west.

My feelings about that are that the potential is there, but like one of the commenters on that post, I'll just wait to see what happens.  Too many times we've seen or read that the Jazz should be up with the elite teams only to have them fall far short.  There are too many other factors such as injuries to take into account.

Hell, yes (thanks to sharebro nick) 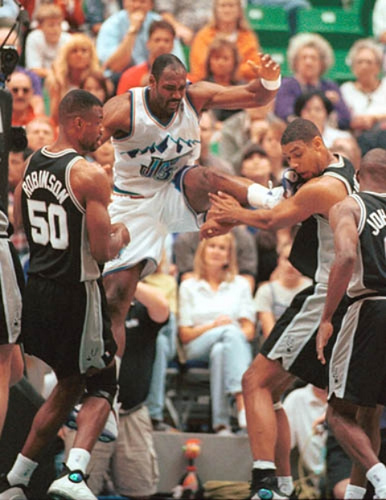 Quick thought...  Is Portland bringing Collins to training camp just to get information from him on the Jazz?

I hope you're ready for tomorrow.  I'm going to try to record as much as I can from interviews and put them up tomorrow night for those that don't live in Utah.  It may take a bit, but I should be able to get some up.

The season is here.