That was AK during the locker room clean-out at the end of the 2009 season.  Here's AK at the media day shoot, 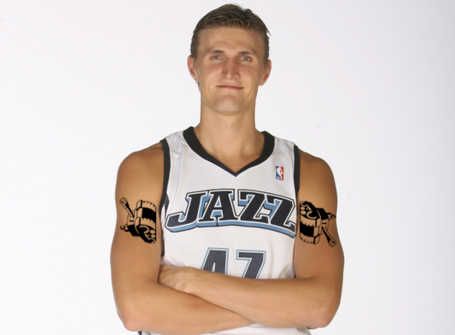 There's some noticeable physique changes.  240 is what he's reported to weight right now.  Can't wait to see what this does for his game.

And what's up with the hair?

Speaking of guns though, check out the KOOF.

I really feel great about this year, and I think I can prove to all my haters that Utah Jazz keep me for a reason

I don't think Fess has many haters, just doubters.  He goes on to claim that he's in the best shape of his life.  I still think the KOOF has passed him on the depth chart, but I would love to be proven wrong.  Fess should at least be able to bang with the big men of the west.

Freak me.  Don't we have about 5 years worth of injury karma spent last year?

I guess I'll have to address the Boozer interview(s) for a minute.  He's apparently been rehearsing for the last couple of months be cause his interview with Locke and his general media interview are IDENTICAL.  Listen an watch,

Is he really a Teddy Ruxbin-like robot and he's just got a cassette under his jersey that he plays over and over?

Just a couple of quick hits from those interviews.  First, here's the transcript from his Chicago interview.  They start talking about trades right off the bat.  Talking about his camp didn't come until almost an afterthought.  He said he was just answering their question, but it was him that first brought up being traded to Chicago,

That being said, I'm assuming to be traded here relatively soon or in good time.

He also told both Chicago and Miami that they were his preferred destination.

We all know that he's "happy to be here."  Is that the same kind of happy you're talking about when asked if the Bulls were his #1 destination, "If it happens, I'd be very happy."

My favorite question from the Locke interview is the one where he basically asks, "How does it feel to not be wanted?"  Awkward.