Share All sharing options for: The Downbeat - 29 September 2009 - #67 - The Bigger Stronger Faster Edition

So apparently everyone on the Jazz is in the best shape of their lives.  This comes from Luhm yesterday about Deron,

Williams, by the way, says he has gained about 10 pounds of muscle since last season.
"... I'm still four percent body fat," he said, "[and] I feel stronger. Hopefully, that will help me throughout the season."

So that's Williams, CJ, and AK that have all reportedly bulked up this year.  Memo said he's in great shape.  Ronnie B bulked up last year.  Ronnie P looks like a beast.  The KOOF hasn't mentioned it, but he looks bigger.  Maybe we see a tougher, more physical team this year?

Oh, and Fess has a girlfriend?  And they don't have a camera following them, why?

Everyone's a hater.  According to Fess, he's out to prove his haters wrong,

"I browse on Internet," he said, explaining how he knows. "Let's just not call them haters. They don't feel really great about me."

I don't know where he's reading.  Nobody is hating on Fess.  Like I said yesterday, we're all a bit let down.

Boozer said he's out to prove his haters wrong as well.  At this point, we're stuck with him.  I couldn't care less about him any more.  As long as he's playing well and helping the team win, I don't think anyone else cares either.

The only thing that will get me going is if he starts causing internal strife.  Maybe KOC is just waiting until the Jazz play Chicago in London to trade him for Tyrus Thomas?  They can both just walk to the other side of the court and swap unis.

The Northwest Division could be the best from top to bottom this year in the NBA.  The Southwest is right there as well.  If OKC can make a leap, this will be a tough division.

As long as everyone stays healthy, it should be a three-team race for the division title with the Jazz, Nuggets, and Blazers.

The scheduling this year is a little quirky in that we're done playing Denver and Portland by February.  So there are no head-to-heads late in the season if you're trailing.

I expect the Western Conference race to be nothing short of what it has been the past couple of years.  The division race could be even better than that.

I tweeted about Hollinger's Utah Jazz preview.  Totally forgot it was insider only.  To get insider cheap, search online for a cheap subscription to ESPN the mag.  I got mine at one place for like $3 a year for 5 years.  Sadly, it's no longer available.  But they pop up all the time.  If you have ESPN the mag, you can get insider free.  Here's an excerpt,

The best resolution would be to trade Boozer for a strong marksman on the wings and move Kirilenko to the 4, a move that would put Utah in a much stronger position to succeed offensively. Until such an event happens, however, Utah's wings are unlikely to scare opponents from packing in the defense to stop the power game.

Much of Utah's projection depends on how the Boozer situation resolves itself, and that's still the biggest unknown heading into the season. Boozer seemed less than enthusiastic about staying in Utah and the feeling appears to be mutual, but his contract and impending free agency makes him extremely difficult to move -- especially if the Jazz are looking mainly to unload his salary obligation.

In this case, all we can do is evaluate the Jazz based on the current roster. On that basis, it appears they have three-fifths of a championship team. Williams is rock-solid at the point, obviously, and the Boozer-Millsap-Okur-Koufos frontcourt can hang with any in the league offensively. Unfortunately, they didn't get nearly enough from the wing positions last season, and with the same four players returning, it doesn't seem that situation will improve.

If so, the Jazz will have a top-10 offense but not a top-3 one, and they need it to be the latter to challenge the West's elite because the defense is merely average. Roster changes stemming from the Boozer situation could alter this outlook for better or for worse, but at the moment, their prospects look only marginally better than last season's.

So he's saying a healthy Jazz team is only worth a two-game improvement?  They were still the 8th ranked offense last year despite all of the injuries.  The two years before that, they had the 3rd and 1st ranked offense in the league.  There's no reason they shouldn't return to a top-3 offensive team this season.

I do agree most wholeheartedly that if the Jazz swapping Booze for a shooting wing would be huge for us.

Seriously Korver, it's time for a haircut.  I know the girls love it, but the season is starting.  No more emo Korver 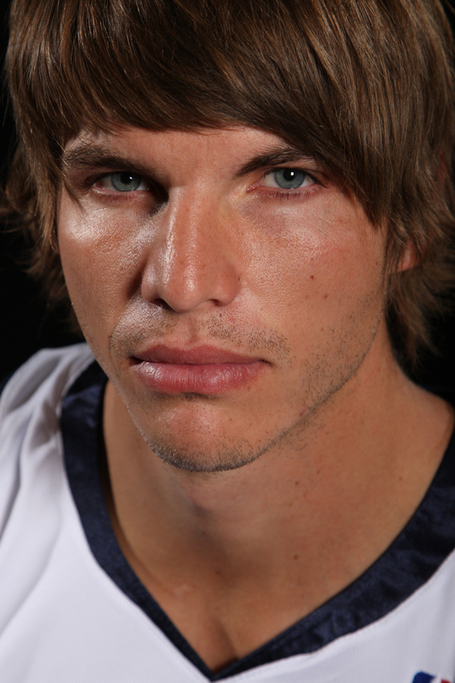