The Deseret News is looking to interview Jazz fans for their favorite memories of John Stockon and Jerry Sloan for an article that will run next week. He needs to talk to you by Sunday. If you're interested, contact John Coon at jcoon@desnews.com

Hmmm, maybe I should finish mine up as well.

Thanks to Pj0219h for this. He likes giving it to Deron

Gotta save some of his comedic quips for upcoming stories about the Hall of Fame, but he cracked me up with an exchange he had with a TV reporter who showed up about 25 minutes into the interview.

Um, can you tell me what's wrong with this photo? 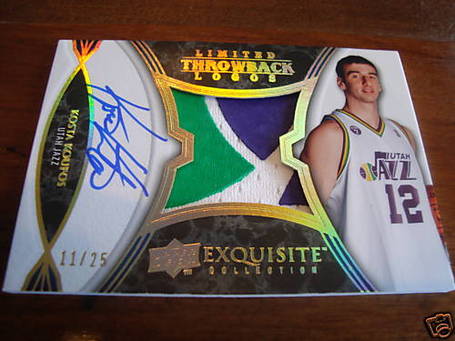 I haven't followed or collected cards for almost 20 years, so maybe there's something going on that I don't know about.

And forget about the Euro Tourney, the KOOF needs to be in town for Greek Days.

Quick poll. I'd like to know where everyone comes from. This isn't for marketing purposes, I promise.