Sad News For Clippers Fans, Good News For The Jazz

Share All sharing options for: Sad News For Clippers Fans, Good News For The Jazz 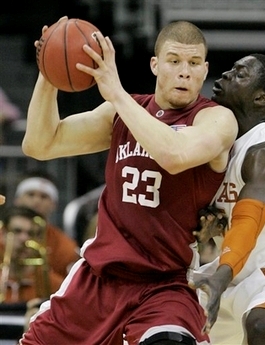 First of all, I just have to express my sincere apologies to Blake Griffin and all Clippers fans.  That's really tough news.  It's actually a sad day for all NBA fans because it would have been fun to see Blake Griffin join the improving Clippers.

With that said, Griffin's absence is going to make it very difficult for the Clippers to make the playoffs, when a week ago, I was afraid that they would pass the Jazz pretty easily.  With that thought, I wanted to take the time to talk a little bit about the first half of the season and see where the Jazz stand and what is in the future.  Right now the Jazz are in the 9th spot, but can they make a move?  What do the schedules of other Western playoff teams look like?  Let's find out.

There are a few teams that are locks at this point to make the playoffs in the West, barring any other catastrophic injuries.  These teams include the Lakers, the Mavericks, San Antonio, and Denver.  Even if the Jazz improve their play and catch the Nuggets for the division title, Denver will still be one of the top 8 teams.  Just trust me. And there are a couple of teams that are locks to miss the playoffs: Minnesota, Golden State and Sacramento, although hats off to the Kings' play thus far.  So let's look at the remaining teams.

Phoenix Suns-  I believe the Suns are a little overrated right now and I am a big Steve Nash and Phoenix Suns fan.  They got off to a big start and surprised a lot of people with some big wins, but their level of play has plateaued a bit.  But they played well on the road when they had a handful of away games to start the season and they are a veteran crew with Nash, Grant Hill, Jason Richardson, etc.   And they have a couple of young guys who are playing great in Jared Dudley and Channing Frye.  The Suns have played 19 road games (going 9-10) and 19 home games and sit at 24-14 right now.  But here is something to chew on.  Last season they went 23-21 in their last 44 games.  They are going to need to do better than that this season.  The previous two seasons they went 29-15 and 31-13 in their final 44 games respectively, but this year's team resembles last years' team more closely.  With older players, you have to worry about how the team will finish and that will be something to keep an eye on.

My prediction:  The Suns will make the playoffs, but will perform at a lower caliber at the end of the season and sort of limp into the postseason.  Maybe literally.

Portland Trailblazers- We know these Blazers all to well.  They play so hard and since losing BOTH of their centers, they have just kept on winning.  But you have to wonder how they will keep it up all season without a true center.  But never count them out.  They have played 21 of their 39 games at home.  You have to applaud the Blazers for playing hard with all their injuries.

My Prediction:  I expect the Jazz to pass the Blazers and I really wouldn't be surprised to see them miss the playoffs altogether.  I didn't expect the Andre Miller signing to work out for them at all, so I guess I need to stick by that prediction.  We may not have seen the end of some possible team chemistry issues.

Oklahoma City Thunder- They are a really hard team to peg, because they are young and lose games they shouldn't, but one day they are going to figure it out and take off with a strong finish to the season.  I think one day is today.  This is a good team that plays fantastic defense.  After a loss tonight to the San Antonio Spurs, they have fallen into a tie with the Jazz in the standings, but they will be around all season.  They have played 20 games at home and 18 on the road.  But the troubling thing for the Jazz?  The Thunder are 2-0 against Utah, so they will probably have the tiebreaker if it comes to that.   Even if Utah beats them twice, the second tiebreaker is division record and don't look now, but the Jazz are a dismal 2-6 in the division.

My Prediction: The Jazz better pray that OKC fades down the stretch, because I don't think there is room in the playoffs for 4 Northwest division teams.  But I just have a bad feeling that the Thunder may cost the Jazz a playoff spot this season.

Houston Rockets- How is this team so good?  On paper, they are average at best.  But they play so hard and they play the right way.  So they have a winning record to show for it.  One would think that they can't keep this good play up.  But, and this is a big but, they are 21-17 and they have played only 15 home games.  That is ridiculous to have such a good record with so many games on the road.  They are in good position to be in the hunt for a long time.  And they also have a great chance of upgrading their team with Tracy McGrady's expiring contract.  If they land Andre Iguodala and Dalembert for instance...look out.  They might become a lock to make the playoffs.

My prediction:  The Rockets will make a big trade and get some nice players back in the next month.  I think they play hard all season and I can't see a playoffs without them.  And they will deserve the playoff spot.

New Orleans-  You can't count them out when they have a healthy Chris Paul on the team.  But at the same time, they are sort of the anti-Houston.  You know that they are going to make at least one more deal that saves the team money and probably gives away a player for nothing in return.  That isn't good for the team and it can't be good for their psyche.  They are also currently out of the playoffs and in many ways are very simlar to the Jazz.  They have a great point guard who probably doesn't have enough weapons around him.  But where the Jazz have inconsistency, the Hornets have ownership who is wishy-washy about spending money.

Memphis Grizzlies-   Common sense would tell you that this team has no chance of making the playoffs.  But they are a talented group that is playing some good basketball.  Last week they beat the Blazers in Portland for the second time this season.  They have also beaten Cleveland and Denver at home and showed some moxie coming back from about 20 down to beat the Clippers the other night. Did I mention that they are 18-10 in their last 28 games? It's as hard to guess what they will do as it is to name what has changed Zach Randolph into the mature player he has become this year.  They have also played 3 more games on the road then they have at home.

My prediction:  I just flipped a coin.  They are out of the playoffs.

LA Clippers-  Don't count them out of the playoffs just yet.  They have been playing better as of late and they have a talented roster.   But the Griffin news is a killer.

My prediction:  The Clips play tough all year,  but end up 5-6 games out of the playoffs.  The Griffin news is a blow mentally, and they are still coached by Mike Dunleavy.  He's totally inept.

Utah Jazz- They have a lot going against them.  They are currently out of the playoffs right now and I have already mentioned their difficulties with tiebreakers.  Houston has the upperhand on them too.  And have you seen their schedule after the All-Star Break?  They have 19 of 31 games on the road.  So...yeah.  The one thing they do have going for them is that they are 4th in the Western conference in points scored, points given up differential, which is usually a very good predictor of future success.  Basically it means that the Jazz either know how to win games easily, or haven't been blown out often and have lost some heartbreakers that could have gone either way.  And that they should catch some breaks in future close games.  This is one big reason you will find them doing so well in Hollinger's power rankings. But the Jazz are only 7-11 on the road and are plagued by inconsistency and may be distracted as the trade deadline looms near.

My prediction:  I won't make a specific prediction, but I will say this:  if they want to make the playoffs, they will have to play much, much better than they have so far.  They are on pace to go 16-25 on the road and with the unusual home games they have been dropping, that record isn't going to cut it this year.  And they need to start by winning lots of games before the All-star break, so that they can gear up for the difficult "road" ahead.  They might make a run and make the postseason, but it would be plain foolish the consider them a lock at this point.