See Sloan?  See?  See what happens when you use a timeout to stop momentum?  You get the turning point in the game.  Check this, 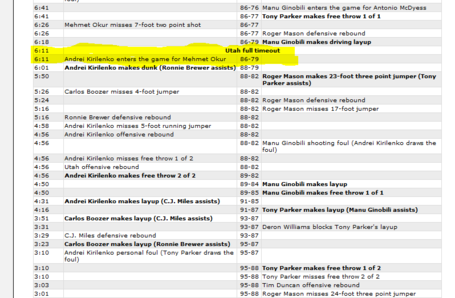 There's no question that AK coming in was the difference between the Jazz winning and them giving up the lead.  He was a force tonight and kept the Jazz momentum going.  26 & 8 from AK-47 tonight.  After tonight, I don't care about his $17M he's making.  I know he's not going to do that every night.  But here's what everyone should realize about AK.  We've all questioned whether or not everyone else on the team is giving their all.  With AK, I have never, ever, questioned him.  He takes some cringe-worthy shots, but you know he's out their busting his can every play.

And when everyone else looks shaken or frustrated, AK keeps playing.  He never looks like he's going to be out of the game mentally.  He's cut out of the same cloth of Stockton and Malone.  Can't wait until he has his number retired with the Jazz.

What can you say about Boozer?  He was phenomenal tonight and owned Timmy.  Flat out owned him.  Owned him to the tune of 31 & 15.  Owned him by holding Duncan to 5-15 shooting for 13 points and stopping him from getting his twenty thousandth point.  Boozer was clutch late by hitting a jumper and nailing free throws to keep the Jazz in the lead.

I can't believe I'm this close to taking Boozer back.  I have to say though that he has done everything you would want him to.  I haven't seen this nastiness from him in, well, ever.  Tonight he was dunking on Blair and then staring him down.  And you know what?  It really looked like the Spurs feared him.  He's putting people on their backs.  He's stopped yelling AND-1 all the time.  Maybe this could all be attributed to his contract year, but I'll take it.  Really, I can't think of anything about Boozer right now that I don't like.  Could he actually be... GULP... a leader?  I've been waiting for him to slip up after so many blunders the past year, but he hasn't.  I'm not sure what else you could be asking of him.

Don't blame me now if he gets injured.

Bizarro, right?  Jerry calling a timely TO is just the start of it.

The Jazz raced out to a 19-5 lead to start the game.  In San Antonio.  They then proceed to give up 25 unanswered points.  Really?  And we still won?  Has anyone double-checked the box score and added up the points?

Instead of crumbling, they slowly got back into the game. They were down 43-30 with a little over 5 minutes to go in the game.  Despite bone-headed plays at the end of the half by Boozer (throwing a football pass the length of the court out of bounds) and CJ (fouling Manu with 1.3 on the clock), the Jazz were only down 5, 45-50 at the half.

The bizarro continued into the third quarter where the Jazz didn't fold.  They continued a strong march and overtook the Spurs on a pair of Deron Williams free throws to take a 62-60 lead.  They never trailed after that.

Lot's more bizarro coming.  The Spurs had no less than 55 missed dunks.  They even pulled off the rare triple-miss dunk where the initial dunk missed, the follow-up dunk missed, and the as the third person was about to put it down, they were called for offensive interference.  Blair missed a couple including one where he got swatted by The Sixth Man (thanks clark).  Hey look, Vitale was calling the game in that movie too.  Weird.

The Spurs were having passes go between their legs, losing balls out of bounds, and all manner of turnovers.  A lot of their 16 TOs were unforced.  Very un-Spurs like.

Perhaps the most bizarre of all was that the Spurs were not getting the foul calls that they normally do.  They didn't get bailed out and the Jazz got to play them straight up.  There were no bogus calls.  Millsap even got a foul call.  Inconceivable.  He wasn't even fouled on the play.  What is going on?

Oh, and did I mention that the Jazz swept the season series from the Spurs?  After losing 20 in a row in SA, we've now won 2 straight?  What is that all about?

This was not your typical Jazz team.  They fought back, didn't collapse, and were clutch late.  ON THE FREAKING ROAD!  This game is probably #2 on the year for me next to the Gaines game.

Tell me the world isn't ending next week.

DWill was visibly frustrated as he got called for fouls 2 and 3.  He made a bee-line for the bench as soon as he got whistled.  He's very frustrated right now overall.  He's not playing mad.  He's giving teammates frustrated looks and doesn't look to be leading things right now.  I hope he makes the All-star game for nothing else other than he'll relax and start playing again.  It seems like he thinks everyone is against him.

He didn't shoot well going just 3-10 from the field.  He still ended up with 18 points by getting to the line 12 times.  That many trips to the line usually means a lot more points for him but not necessarily a win.

You're killing me.  You take some bad shots, make some bad fouls.  Then you go and make three pretty assists like that late in the game.  I need some consistency.

Solid game from Millsap again.  Great shooting percentage with 5-7 on the night for 13 points.  He had just 3 rebounds but had two huge blocks.

So a weird season gets weirder.  One day we're up, the next we're down.  I'll echo the comment where we should hope that the Jazz don't ever win 5 in a row so that Deron's beard gets all Grizzly Adams.  I could live with 4-1 spurts over and over for the rest of the season.

You'll have a couple days to relish in this series sweep until the Nets come to the ESA on Saturday.