I have to recommend everyone get a Deron Williams classic green/yellow jersey.  Luckiest jersey ever.  Oh, it wasn't lucky for the Jazz (they didn't need any against the Nets), but it's a souvenir magnet.

I picked up three giveaways thrown into the stands on Saturday.  Mind you, I was in the 15th row of the upper deck.

First, I was able to snag one of those "Let's Go Jazz" fold up signs.  Next, the promo team came up into the stands to throw out those mini-soft Jazz basketballs.  As they tossed one to the Jr. Jazzers behind me, I jumped and snagged it from their wanting hands.  Okay, so I turned around and gave it to one of them.

The big haul of the night came when they were shooting Sprite basketballs into the stands.  First, I can't believe they slingshot those outdoor balls into the stands.  Regardless, the Jazz Bear was pointing right to our section for the last shot of the night.  When the events crew lined up the slingshot, they had it pointed to a different section.  But Bear realigned it and pointed it back at us.

All of the Jr. Jazz kids rushed the aisle to catch it.  As the ball sailed in our direction, it started heading right for the kids.  And in super slow-mo, that hard, green ball bounced right off their tiny hands and right into my lap.  They never had a chance with that velocity and mass.  They weren't getting it from me either.

Oh come on, I gave them the smaller one.  The big one was just karmic retribution for me, right?  Besides, I gave it to my kids.

Also, I saved one of the boys when he got pushed over the sets and could have tumbled a ways if I hadn't been there to catch him.

Oh, and everyone got free tacos which caused a massive traffic jam at the bottom of the stairs as one little usher was inundated with hands stuck in her face.  It's a taco people. 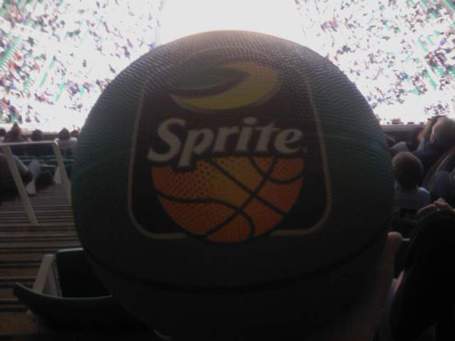 Could we see the beard shaved by the end of the week?  It's definitely doable with home games against Phoenix (who has struggled recently) and Sacramento, they have a shot.  What could de-rail the shave for the time being is the game in Portland.  They're hurting and may or may not be without the services of of Brandon Roy.  It will be a tough game but it's definitely winnable.

Have mercy.  I was out getting ice cream when this happened (hover for the play button)

John Hollinger's recent power rankings have the Jazz at #2.  He also said a couple years ago that the Jazz would make the finals.

His rankings are big on"what have you done for me lately."  What us your point differential over the last 25% (about 10) games?  He also looks at wining percentage of other teams, home/road games and records

What's vaulted the Jazz to the #2 spot is their recent winning margin.  They're at +9.55 over their last 25% of their games which is tops by far.  When they've won, they've won big.  Couple that with their strength of schedule (wins over Dallas, SA, and Cleveland) and that's why they're at the top.

By his own admission, it doesn't take into account any human factors.  Are the Jazz the #2 team in the league right now?  Maybe not when you look at the entire season, but for the last 10 games or so they arguably could be.

We've talked about the Jazz needing to put together a stretch of about 15-20 of some consistent ball to show that they've turned a corner on the season.  They've gone 6-1 since that game inclusively.  They have 8 games left until the All-star break with only 2 on the road.  That would put them at the 14 game mark.  If they go 7-1 or even 6-2 over that period, do we start to believe?

It would be hard not to if not for last year's April collapse.

The final INLITTDOC coming at 10.  Finally!