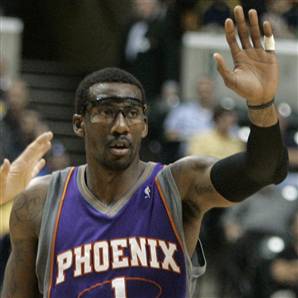 Who should Amare Stoudemire talk to about recent trade rumors and his current contract situation?  Probably Carlos Boozer.

After a torrid start to the season that had the Phoenix Suns at 14-3 with a majority of their games on the road, many NBA experts apologized for premature reports of the Phoenix Suns' demise.  But a couple months later, the Suns find themselves in a 5-7 stretch and amid reports of locker room issues and trade rumors involving polarizing PF/C Amare Stoudemire.  Sound familiar?  It should, because I can't think of two players in the NBA that have as similar of situations as Carlos Boozer and Amare Stoudemire.  Both are very talented Power Forwards who have had their desire and defensive effort questioned by fans and league executives. Both have been plagued by injuries.  Both are playing out, presumably, the last year of their contracts, although Amare does have a player option for about $17 million next season.  Could Amare also find the offseason well drier than he thought and opt back in with Phoenix?  There are some interesting parallels there for sure.

As for the two teams' seasons, they sort of mirror each other a bit, only with an opposing effect on one another.  The Jazz came out of the gate and sort of stumbled, while the Suns looked like legit contenders in the Western Conference with the second best record in the conference for awhile.  Now the Suns are in a downward spiral and the Jazz have their collective eyes on a 2 or 3 seed in the West.  Both teams will be involved in many trade rumors the next 3 weeks as both teams probably aren't contenders for the title, but are just hovering above the luxury tax line by 4 or 5 million dollars.  Luckily the Jazz are the team on the upward climb right now.

As for the game, it has many implications.  If the Jazz can pull off the win tonight, it would keep the Jazz in 6th place in the West and keep them at least one game within the 4th spot.  At this point in the season, it is vital that the Jazz beat Western Conference opponents, especially at home.  Like the Jazz, the Suns have been able to keep their main identity over the last several seasons.  Unlike the Jazz, they are a fun, run-n-gun type team that utilizes the 3 point shot.  This system is run perfectly by their pilot, Steve Nash, a player who is deserving of his All-Star selection this year, as he is enjoying one of his best statistical seasons and keeping the aging Suns relevant in the West.

It seems like every season Steve Nash or the Suns offensive system is the reason for the rebirth of someone's career on the team.  Last season it was probably Grant Hill.  Before that, Tim Thomas.  And I think it's safe to say that Shawn Marion needed the Phoenix system more than Phoenix needed Shawn Marion.  This year, that man is Channing Frye, who is having his best statistical season since his rookie year and shooting a blistering 43% from the 3 point line.  Similar to what happened to Mehmet Okur, teams are starting to guard him on the perimeter more often and making him put the ball on the floor.  Frye has gone from shooting 6 three pointers a game in October and November to just 5.2 in December and just 4 a game in January.

The Suns are still a talented team even though they may be losing right now and have some uncertainty surrounding them that has nothing to do with basketball.  In Salt Lake City the Jazz should be able to beat them and if they play defense and rotate like they have been, they will be in good shape.  But at the same time, a team like the Suns can win almost any game if they get hot from beyond the three point line.  Hard to predict what will happen, but right now a defensive lapse by the Jazz is one of the last things I would predict.  Who ever thought that would be the case?  So get out your popcorn and put on your GM hat and join in the fun tonight at 7PM MST.