So, are the Jazz the best team in the league right now according to Hollinger's ratings? From the man himself (emphasis mine),

So … on to the big question: Am I saying the Jazz are better than the Cavs and Lakers? Depends on what you mean by "better." The Jazz are playing better than anyone in basketball right now, and that's why they're No. 1 in the Power Rankings -- which, by nature, are designed to put a heavy weight on a team's current form. If the Jazz were to start a series against Cleveland or L.A. that tipped off Tuesday, I'd be seriously inclined to pick them.

But "better" in the global sense? I'm not going anywhere near there yet. The Jazz earned the top spot in the Rankings thanks to a lack of dominance from the league's elite and their own recent torrid play, and props to them for it. That said, I need to see them do it for more than a couple weeks before I anoint them as legitimate challengers to the throne.

Which is pretty much what we've been saying all along. If they finish out the rest of the games before the break strong, then you might be able to put them there.

With that same thought in mind, isn't the team's recent streak an even better indicator that a deal needs to get done? Before we wanted a trade to shake things up. With the team playing the way it is now, aren't we just a piece from being considered an elite team and competing at this level consistently?

It only took me 25 clicks to get this result. Pretty good results for the odds. Also, doesn't the last place team still get screwed? Almost every spin of the lottery resulted in NJ getting the 4th pick. My thinking might be off here, but isn't 25% less than the 75% that represents the rest of the field? So isn't it more likely that someone else other than the Nets gets the #1 pick? 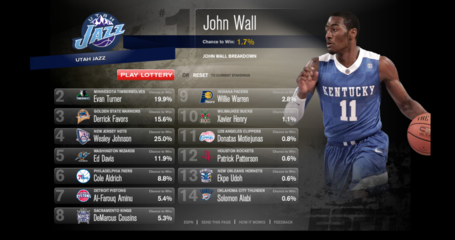 With 38 regular season games left in the season, where would the Jazz have to finish in order for Sloan to win the COY award? Would second in the West and third or fourth overall do it? What about a third place finish in the West? Maybe he should coach the Nets next season, win 20 games, and then finally get one?