Maybe those weren't the exact positions of everyone but that was your lineup to close out the game.  I doubt you ever see that again, even in a blowout.  But that was the team that got the job done and finished off the Kings.

It was a big night for a lot of people.  Let's start with Hot Rod.  It was his night as the Jazz recognized his amazing contributions to the team by hanging a banner in the ESA which features a microphone (I guess that will due instead of a bronzed one) and the old Jazz note.  It hangs right next to Adrian Dantley's #4.

In addition, the Jazz also unveiled the Hot Rod Hundley Media Center which is a museum of his playing and broadcasting days.

I have to say that the Jazz did this thing right and paid great respect to one of the franchise's figure heads. 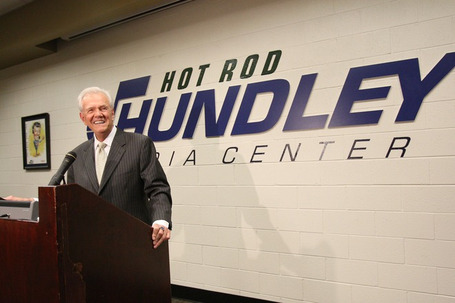 Paul Millsap could have his own jersey in the rafters with performances like this.  This is what we saw last year when Boozer was out and Millsap was thrust into the starting role.  This is what we thought we would have at the beginning of the season.  Don't get me wrong, Boozer has been a beast and has quieted even his most ardent naysayers.

But those that say we'd lose something offensively with Millsap should Boozer leave have also equally been quieted; at least they should after last night's performance.

Those are MVP-type numbers.  Of course he's not going to put that up every night but we can see what he's capable of.  It also isn't a fluke performance.  He tied his career high with those 32 points.  This has really been a continuation of his play this season.  He's been playing really well and shooting very well. In

There won't be a call to trade Boozer.  I wanted him traded earlier for different reasons.  The chemistry issues that were there before seem to have been resolved or at least tempered a bit.  Of course a game winning shot over the Cavaliers does a lot to bring the team together.

It's a fantastic problem to have to power forwards that are as potent as they are.  They have different styles to be sure but they both work and they both can cause problems for other teams.

Actually, we have three power forwards that can do some damage.  Last night's performance was without a doubt the Andrei Kirilenko that earned himself the max contract.  Every time you think to yourself, "How can we be paying him $16 Million a year?", this is why.  That might be still high but he was doing this every night.  Remember, this was before the Jazz knew they'd be able to land Boozer, Memo, and draft Deron the next year.  AK was going to be the man.

He's still got it.  I think we'll see AK's jersey retired regardless of what happens after next season.  He's stated that he wants to be back with the Jazz when his contract is up.   It would kill me to see him having these types of games in another uniform.

Maybe it was the AK nostalgia, but this was another 2004 game.  What I mean by that is the 2003-04 team that was suppose to be one of the worst teams of all time.  After Stockton and Malone left, that was going to be the end of the franchise for a long time.  Instead, they won 42 games and missed out on the playoffs by one game.  They did that by playing in the system and everyone knowing their roles.

In this 2004 game, we had some more unknowns step up and play well.  I guess he's not completely unknown now, but Sundiata Gaines earned some big time minutes last night.  Without looking it up, I would have to say his 24 minutes on the floor is more than he's seen combined since hitting his big shot.

He had 7 & 3 in the second quarter that helped the Jazz pull away for the time being from the Kings.  He played the entire 4th quarter of a pretty close game.  He didn't shoot well in the final stanza but had the team running the offense and playing well.

Say what you want about Sloan's rotations and substitutions, and rightly so on some occasions, but a big part of the reason for the recent success of the Jazz has been Sloan having the right personnel out on the floor.  He's left rookies in when in the past there's no way they would sniff floor time in games like this.  He's not been afraid to leave the big names on the bench if the other players have been playing well.  Maybe you can teach an old dog new tricks.  He's mentioned before that certain players probably deserve more PT or that he should have let others play (see Ronnie Price against the Lakers last year).

We also didn't see Memo for the entire fourth quarter.  Instead the Jazz went small in part because the Kings did.  That meant having AK at the 5 while Millsap filled the 4.  It worked like a charm as those two worked the fourth and helped keep the Kings at bay.

So that makes 5 in a row, the longest streak this season.  The Jazz will have a couple of days off before Dallas comes into town Monday.