A Memo To Memo: Shoot the Ball

Share All sharing options for: A Memo To Memo: Shoot the Ball 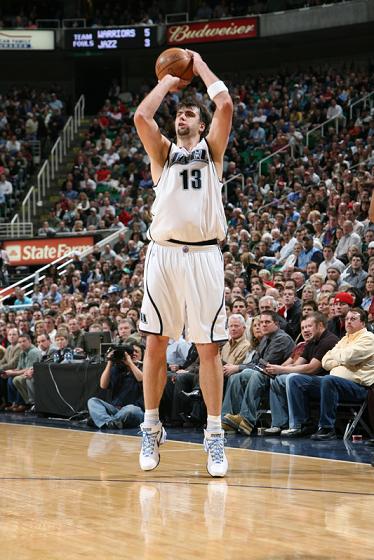 I am not a pretentious enough guy to think that Mehmet Okur or anyone of influence in the Jazz organization will read this post.  I mean, I know that most SLCdunkers won't even take the time to read it.   But just in case Mehmet gets any wind of things we discuss on this website, I just wanted to send him a message:  SHOOT THE DAMN BALL!  Please.

We have discussed ad nauseum on this website, how irritating it is to watch Okur pass up open three pointers in order to drive to the basket.  I understand that he wants to expand his game and work on his low post moves, but he shouldn't be doing it to the detriment of the team half way through the season.  Teams are also defending Okur differently by running quicker bigs at him and if his shot is going to be contested, then he is right to pass it up.  But Okur is passing up open looks far too often and it's not the right decision.

To defend my argument, I give you exhibits A thru Z.  In the first quarter of last night's game, the score was 18-10 in favor of the Jazz.  Okur had just swished a three pointer the possession before.  The Jazz whipped the ball around the offensive end until it landed in Okur's hands beyond the arc with about 12 seconds left on the shot clock and no defenders within 8 feet of him.  Spencer Hawes ran out to challenge the shot and Okur threw up a pump fake and dribbled right by Hawes.  The problem was that the help defense showed up, forcing an Okur pass out to Ronnie Price with less than 10 seconds on the shot clock.  Price dribbled a couple times before passing to Paul Millsap beyond the 3 point line who was being well guarded.  Millsap was forced to shoot a contested fall-away 3 pointer, an airball.  Twenty-four second clock violation and a turnover.

Pumpfakes can be great weapons, but only if used correctly.  If the result of a pumpfake is going from a wide open three pointer by a guy who shoots 39% from distance to a contested 3 pointer by a guy who shoots 17% from behind the arc, then that pumpfake is killing your offense.  No offense to Mehmet, but your pumpfakes aren't leading to better shots.  By being unselfish and shy about shooting threes, you are hurting your team.  Okur, while talented is not fleet of foot.  Asking him to expand his game by driving to the basket is like asking Ronnie Brewer to work on his 20 foot jumpshot...er, I mean, like asking Kyrylo Fesenko tp work on shooting three point shots.  It's a waste of time.

Even though it seems like Okur is having a down season, he is still shooting almost 40% from the three point line.  He is shooting the same amount of 3 point shots as last season, but Boozer wasn't around and Okur operated more effectively in the post.  He shot two more shots a game last season and almost two more free throws.  This season he should be shooting like it's 2007.  That's only 4 three pointers a game.  One a quarter.  Not too much to ask.  So Mehmet, just trust me.  It will be better for everyone but the opposing team, if you just start shooting the ball.  No more pumpfakes.  No more wasted possessions.  I don't care if you miss.  You are going to make it 40% of the time.  Don't drive to the basket.  And please give us our "Money" back.