It's no wonder that a lot of second-round picks and undrafted guys feel that they can make it with the Jazz when you have Sloan saying something like this,

They get out there and have a chance to prove themselves and make themselves better. I think that's what a lot of players lack, some know-how of how to play at an early stage, and that's something they can learn if they work at it. Maybe somebody cuts them at the beginning, but if they stick with it, there's always an opportunity. We've had a lot of second-round picks two have played well, going back to Bryon Russell, David Benoit and Howard Eisley, of course Paul Millsap and the kid we had last year, Wesley Matthews.

What up doe?  Maybe the Jazz should just look to trade all future first-round picks for multiple second-round picks since they find such a high percentage of contributors in that second round.

We know that Sloan plays the players and not the contracts so it's no wonder why guys like Ryan Thompson turn down a spot with the Kings, and playing with his brother, to come fight for a spot on the Jazz.  I don't know the Kings' situation, but he obviously felt like he had a better shot here.

One more thing about that quote that I like, Sloan referring to Matthews as that kid.  We will miss OMSW but it doesn't seem like Sloan does; he just plays who he's given and doesn't lament over players lost.

So on the team's only visit to Chicago this season, we'll get to re-live the Bulls' first NBA title.  Sweet.  Jordan and Pippen will be there.  Maybe in another 7 years they'll let us come to celebrate their last title?  Yes, that was a dig at the current Boozer-Bulls team.

Trying to put your Jazz homerism aside, where do you draft the Jazz players this season for fantasy basketball?  A lot of that depends on your league's scoring system, but is Deron a first-rounder, fantasy-wise?  Al Jefferson's value could go up a bit.  Who are your first 5 Jazz men drafted?

Could a change of scenery been all that was needed to release the best inside the KOOF?  He wasn't supposed to be hanging with the TWolves this long, mainly because he doesn't play PG, but he's been making a name in training camp and impressed in the team's scrimmage.  While the Jeffereson trade will likely still be a lopsided deal, it could be a little less so if the KOOF can get the time to develop.

In other former Jazz-man news, Ronnie Brewer and Korver are fighting for the starting job in Chicago.  Ronnie has a sore hammy (not the same as last year's injury).  They both are pretty one-dimensional as far as their games go.  If you could somehow Voltron the two, you would have something.  Of course, if that were the case, they would be getting paid a lot more.

So you should be able to see the new floor I'm assuming tomorrow for the scrimmage.  The official reveal had been put off and we haven't really heard any updates since.

Doesn't the new court create a completely different feel to the ESA?  The darker tones change the light reflecting off the floor.  What affect will it have on the team?  I'm assuming none as they're not likely looking down at the court when they're playing.  Although, Memo could stand to take a quick glance down when he's about to shoot the world's longest two-pointer. 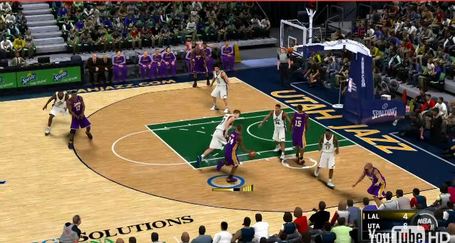