I hope everyone has one of those new-fangled teletubes because apparently the game tonight will be broadcast, in color even.

I realize that some of you may have thought you watched the Jazz play the Blazers last week because you were at the ESA in person, but how can we really know if the Jazz are actually playing unless we see them on TV? That's right, you can't.

I mean, are we even sure this Jeremy Evans kid even exists?

One of the things we've learned from Al Jefferson since he got here is that there's a lot of misconceptions not only about Utah, but about the team. He's stated that Utah was nothing like he had heard (it's much better) and now admits that he has seen a different side of Sloan,

Coach has another side of him I've seen that I didn't see [when I was] with the Timberwolves. He likes to joke, he likes to smile every once in a while. I'd never seen him smile before I got here.

Now if we could only get Al to clear up other misconceptions. 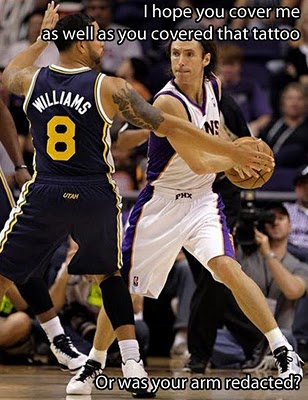 Well, this may finally get me to Orem to watch the Flash,

The games will take place on December 3, January 22, February 25, March 5, and March 19. Flash fans can expect food to be served up until the third quarter of the game. Meals will consist of pastas, hamburgers, hotdogs, pulled pork sandwiches, drinks and desserts.

You get those 5 games for $55. I've wanted to get down to see them for a while. It might cost me less just to stay home and have my own all I can eat buffet, but now I can see Evans and others possibly. Maybe they'll bring in Larry Bird (to follow up Jordan's appearance last season) as an added bonus.

All I'm saying is that these meals better be actual food and not just pictures of food.

Also, if you're seeking eternal glory, they're also holding tryouts.

Thursday poll because we haven't had one in a while,