The Jazz Love Teams That Start With P, Beat Phoenix 108-97

Share All sharing options for: The Jazz Love Teams That Start With P, Beat Phoenix 108-97

In about a week, the qualifier of "but it's the pre-season" will start  to mean a little less.  We'll start to see starters go longer and rotations round out.  So for now you still have to include that but 4-0 in the pre-season is still better than 0-4 in the pre-season, right?

Get ready for this heavy-hitting analysis:  the Jazz are playing well.  There's still some things to work on and we're seeing a lot more of the rookies than we will come regular-season tipoff, but overall, things are looking good.

Last night the game was tight for most of the way until late in the third and early in the fourth when the Jazz were able to pull away against their second team with some good D and rebounding.  You have to like the team stats with 51 rebounds (to PHX's 34) and 15 offensive boards.  The free throw shooting was good again, something that has been a concern.

What's been most impressive is that the second and third units are getting it done, sometimes against the starters on the other team.  Locke has brought this up, Harpring said the same last night, and Randy Rigby agreed that all 17 players should be in the NBA this season.  From Deron to Jeffers, they've all played respectively good basketball.

Like I said, there's still work and improvement needed, but they're a lot further along 4 games into the pre-season than I thought they would be.

One of the big reasons is that Al Jefferson seems to be dialing things up.  He struggled in the first half on D and those struggles were less noticeable in the second half.  Part of that reason was that he was tearing it up with the ball.  He's still got that "give me the ball and get out of the way" scoring mentality and I wonder if the Jazz just aren't drawing up iso plays for him.  He did have a nice look to Millsap for a layup but for the most part he was going to work.  From a spin-move, to elbow jumpers, and put-backs, he was doing it all.  His dunk over Lopez on one put-back was unexpected as our previous PF would have laid that in, and possibly would have been blocked.  24 points, 6 boards, and 3 assists in 26 minutes?  I'll take that.

I'd also like to see how the Al's D is when he's playing along side AK for most of the night.  Andrei should be able to mitigate things.  Though as was pointed out in last night's game thread, Al's pick and roll defense was atrocious.  We'll see if he can improve on that.  Really, he has to since that's the only way to go.

If it wasn't for Al, Fesenko would have been the lead topic of discussion.  He had 8 & 5 in his 15 minutes of play including one block.  He is finally getting those boards that a 7-footer should be getting and scoring off of them.  All I can say is, where has this been the past couple of years?  I know he hasn't been given much playing time, but some, if not all of that responsibility lies with him.  Rigby stated yesterday on KFAN that in Fess' closing interview last season, that he was going to improve (paraphrasing).  That he's done.  He looks like a different player.  When asked what he's trying to do last night, he replied, "stay positive, ... stay Jazz."  Hmmm, we might have a replacement for our SLC Dunk motto.  We'll see if he can continue this but all indications are that he will.

My favorite thing to see on Fess all night was that he had his hand in the air almost all night on offense calling for the ball.

Is it too early to start my Shums/KOOF obsession with Evans?  You have to look who he was playing against but really that's who he would be getting time against in meaningful games.  I'm glad we were finally able to see him dunk last night, once and a put-back and once on the receiving end of an alley-oop.  There were a couple of times that I thought he would throw down.  It left me severely disappointed.  He can flat-out board and go get the ball.  I mentioned this in last night's game thread, but he seems to have picked up the offense well as every time he got the ball, he seemed to know where to look for cutters and made some pretty good decisions.  Everyone wanted an athletic big man and here he is.  Garret Siler might eat Evans' weight in breakfast burritos every morning, but we have a player.

Hayward struggled early tonight and has struggled in the pre-season with his shot.  He was able to get things going a bit late with some nice passes including one to a cutting Deron to the basket.  According to @tribjazz, he seems a bit down on himself.  He'll be fine.

No one else really stood out last night, for good or for bad.   Deron was Deron and helped start the late third-quarter separation.  Oh, and he faked Nash out of his socks with a nasty crossover.  Deron is ready to go.  CJ was decent and Millsap continues his quiet pre-season.

I'm liking how this team is coming together.  The chemistry is undeniable.  We'll get some better tests for our big men in the next game against the Clippers as we'll be going up against Kaman and Blake Griffin. 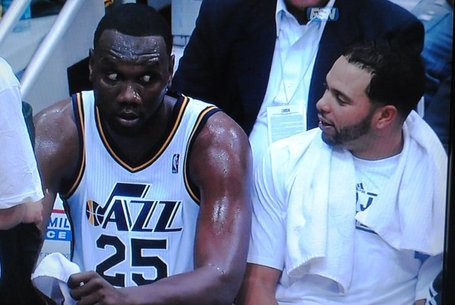