I don't envy the job of having to cut some deserving guys which should come sometime today. It's expected that the Jazz will keep just 13 players. If they do keep 14, then Jeffers has the edge according to Brian T. Smith.

If that's the case, then Nichols, Gaines, and Thompson could be hanging around by getting assigned to the Flash thanks to a new rule this season that allows players to be assigned to the team's D-League affiliate instead of a regional assignment.

UPDATE 2: All four have been cut.

The Jazz organization gets major props from a, gulp, Rockets fan? No, it's not ClutchFans or the Dream Shake, but Red 94,

Because that is what Utah does; it does not adjust, and it certainly won't fold or break. It forges on, trudging through new paradigms and eras, waiting for its opening. By tipoff of opening day, the flex offense and its components will be in motion, whether Jefferson has learned to play in it or not. The defense will be violent, as it always has been. And the Jazz will win because that is what it knows how to do, regardless of context.

The whole thing is a great read.

I realize that 99.9% of Yahoo! Answers are trolls trying to get a reaction, but I died when I came across this,

I guess the blinking lights could cause a distraction

Of course the banned shoe talk comes from the league's banning APL's Concept 1 shoe which is supposed to give you a few extra inches on your jump. The fact that they banned them seems to suggest that they might actually work. What's next? Are they going to ban Jimmy's Sneakers as well?

Karl of course doesn't work with brands such as Nike, Reebok, or adidas. He prefers the lesser-name brands which is why he's apparently endorsing Skechers now. The Shape Ups are helping to make his legs stronger apparently,

"To everyone who's too busy to work out, you're out of excuses," said Karl Malone. "Shape-ups are easy and they really make your muscles work. I've got more strength in my legs and core, and my energy level is up. They're even easier on my joints than other shoes. I'm excited to stand behind this shoe because it delivers."

If you don't know what Shape-ups are, here's a look, 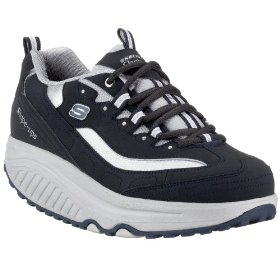 No word on if they're making a hunting-boot version or how you drive in the things.

Deron is currently a 40/1 shot for the MVP this season. Of course the favorites are likely to be Duran, LeBron, Kobe, and the rest of the crew. Where Deron just made the All-star team for the first time last season, it's still a long-shot for him to be considered in the MVP race.

What would it take for him to a legitimate contender? Wins are obviously the biggest thing. If you look back at when Nash won in 2005, that Suns team had 62 wins. He edged out Shaq that season. The following season he won again yet the Suns only had 54 wins. Nash led the league in assists both seasons and had 15 and 18 points per game.

The voting comes in April, so to have any chance, I think the Jazz would have to be heading towards 60 wins and near the league's best record to have a shot. Given that most analysts predict the Jazz to finish with around 48 wins, anything in the upper 50's would get attention.

Deron might not lead the team in scoring, but he'll be #2. When Nash won, he was shooting over 50% from the field and over 40% from three. That's something that Deron is capable of doing.

In order for him to win though, I think the Jazz have to have the best record in the conference and he has to take his numbers up a notch.

Of course, when Nash won, there was a bit of controversy over it, especially with the second one. This year, Deron will have to overcome the likes of Durant and LeBron. That might be a bigger leap.

Who's most likely to return to the Jazz at some point this season?