The Jazz rank 7th this year on the watch-ability scale,

Criminally under-ranked in last year's edition. Deron Williams is awesome, and they always find a way to execute well offensively. Al Jefferson's an interesting new wrinkle, but I think they'll eventually figure out a way to work him in. Either way, with Williams around, they'll always be one of the best transition teams in the game, and when you combine that with their pinpoint half-court offense, they're a pleasure to take in.

There are a lot of stereotypes about the Jazz style of play with the biggest one being that Deron sits out and plays the pick and roll every single time down the court.  Not everyone believes that, but I would venture to guess that those that watch the Jazz that aren't Jazz fans are few.

It's also a personal preference for the type of offense you like to see.  Do you like isos, run and gun, or executing sets?  There are great things to watch on most teams but I don't know if the Jazz will ever shake that slow ball stigma.

As a Jazz fan and a Deron Williams fan, this has to set you at ease a bit.  When asked if he the Jazz should worry about him trying to leave, he had this to say,

"I just want to win," Williams said. "My team has been winning, for the most part. Last year we got eliminated early, but we just got to get better. We got some pieces to do that. I'm happy right now.

"I'm under contract. I honor that contract, respect that contract and just play basketball. I'm never going to say never. [But] I don't see that happening."

Spears goes on to talk about the nearly $18M player option that Deron has for the 2012-13 season that could be an added incentive for Deron to stay around for another year.  With Stern looking to cut 1/3 of players' salaries in the next CBA, that number looks even better.

So if the Jazz are winning this season, is it possible that we see Deron sign an extension?  It would allow him him sign for more money under the current CBA.  The other thing to consider is everyone's contract on the current team, with the exception of Hayward, will expire at the same time.  That's assuming Deron picks up his option.

Al has said that he hopes to retire here.  AK wants to come back to the team.  There really isn't any reason to believe that Millsap and Miles would want to go anywhere else.

If the Jazz are winning, and become true contenders, then being part of that core group of guys has to be attractive to Deron.

It's still early, but it looks like Ryan Thompson will head south to play for the Flash according to his twitter account.  I was checking the Flash website for news when I thought I stumbled on something playing with URLS,

Turns out though, you can plug any player, whether they've been in the D-League or not, and it will pull up a page for them, including a picture.  They won't have stats unless they've played there.  So no, DWill won't be playing in Orem this season.

However, you here are the details on that all-you-can-eat deal they're offering for $55.

I missed this from last week, but it was a Q&A with Sloan by Genessy.  When asked what his motivation was to keep coaching, this was his reply,

I don't know what I'd do. (I'd be bored) if I just went in the house and sat down. I don't see any excitement about that. I'm fortunate they've allowed me to come back. I've never looked for another job since I've been here, and if I leave this job then I'll have to look for another job ... whether it's a Walmart greeter or what have you.

It's hard to imagine him doing anything but basketball.  I think we've all pictured him retiring to his farm and riding the John Deere all day long.  A Walmart greeter though?  I don't see that, 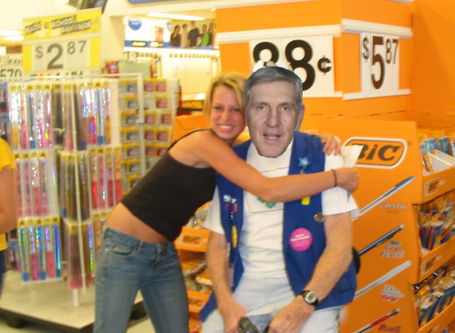 A good breakdown and understanding of the flex offense from Sebastian Pruiti.  Make sure to click through for more.

This next option is another read off of the defense. In the above clip, Kobe sinks in the lane to help out on the cut to the baseline.  Reacting to that, Raja Bell quickly pops out to the wing where he can knock down an easy uncontested jumper.