Here we go. Game 1 of 82 is finally here. Everyone else in the league gets to unwrap their seasons whether they be Pink Nightmares or Red Rider BB Guns.

Here's my commitment to you, a post-game recap on every game this season and occasionally adding some effort to it. How many 5-hour energy drinks that will require of me, I don't know.

Thanks again to Amar, UtesFan89 (the first to join SLC Dunk), moni, , Shums, and clark for their contributions and for all of the great FanPosts/Shots and comments by you.

Great compilation of Jerry Sloan the player by moni.

And then CJ expands on that in Smith's notes,

Not that he was ever a bad person. It's just a more conscious effort to do certain things that he wanted to do for his self.

It's obviously rubbed off on some people; teammates and everybody. We have a really good group of guys. He basically just makes us better guys.

Took it up a notch. ... We needed that with as many new faces as we have.

And then Locke had this to say last night when the players are in Denver,

Deron was in the lobby with Fesenko, Watson and Elson. I saw this as a sign of his leadership these are not the guys he usually is with and it may have been intentional to foster stronger relationships.

Finally, Deron was named as the team's sole captain for the upcoming season. We'll see a more distributed workload this season on the court, but off the court, it all appears to be on Deron's shoulders. Does that seem like someone who wants to leave in a couple of years?

From CJ Miles last night after watching the Lakers get their rings, 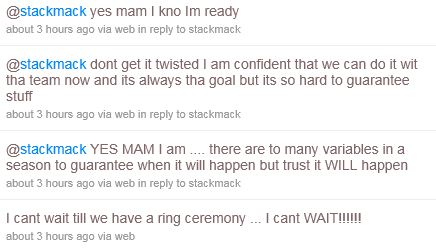 I'm looking forward to the next 2-3 years to see what this new team can do.

Only two of the league's 30 teams will be without at least one foreign player on opening night while the Toronto Raptors will have the most international flair with six foreign players.

The Dallas Mavericks and Utah Jazz will both field five international players while eight teams have four.

If you're counting at home, that's AK, Memo, Fess, Elson, and I'm guessing Bell (who was born in the Virgin Islands though he's about as American as they come). AK and Fess were picked by the Jazz while the rest signed as free agents. Should Tomic come over next season, we would lead the league in something other than fouling.