This is not a preview … Game 1 vs. Denver Nuggets

Share All sharing options for: This is not a preview … Game 1 vs. Denver Nuggets

This is not a preview. (especially not for this game: Jazz vs Nuggets coverage against Denver Stiffs' team) I used to do those, but there are more talented guys on this SLCDunk squad who are better able to handle those than I. Here is a collection of things that I’m interested to see / keep in my mind as this game goes on: 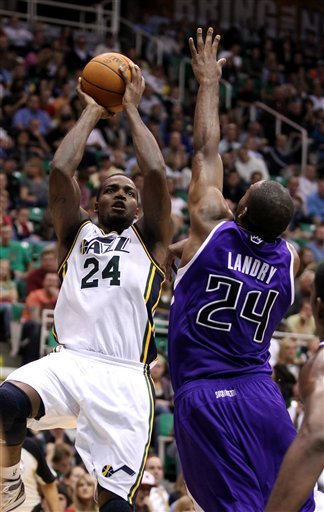 Millsap appears to be pushed out of the paint, for better or for worse. He’s really worked hard to incorporate a step-back jumper with usually goes in. Sadly, I don’t want Millsap to be relegated to such types of moves on the court. I remember energy ‘Sap from previous years where he would be attacking the basket every time down the court, remember that spin move he developed? Millsap was able to be that utility man in the paint, but I think he’s deferring to Al in the painted area a little too much right now. Ironically, the incumbent back-up power forward (Jeremy Evans) is playing like a young Millsap right now – all energy, all the time. That said, the major knock on Sap isn’t that he’s playing passively (he’s almost averaging 3 assists per game, which is like Anthony Mason from back in the day), it’s just that he’s not making the shots that he’s taking. Is this a product of being pushed out of the paint or something else? I don’t know. I do know that Millsap with a Shooting Worth of 1.14 (sub-Iverson, btw) is not going to last all season long.

Deron Williams will be Deron Williams. And unlike in the playoffs, Chauncey Billups will be Chauncey Billups. The rubber match will be which of the back up points will be able to direct their team better. Last playoffs Lawson channeled Shammond Williams (circa 1990-2000) and really was aggressive – especially in pushing the ball up the court in transition. I haven’t followed his development over the summer, but I’m sure he’ll be coming in with a better three point shot than before. To counter him the Jazz have Ronnie Price (the spectacular but never solid), and former Nugget journeyman Earl Watson. Watson appears to have won the back up spot. In the last game he was aggressive and going to the basket. I would like to see him set up the team a bit more though. I think the back up battle will have a big impact upon the game, especially if one of the starting points gets in foul trouble.

The Man who doesn’t want to be here 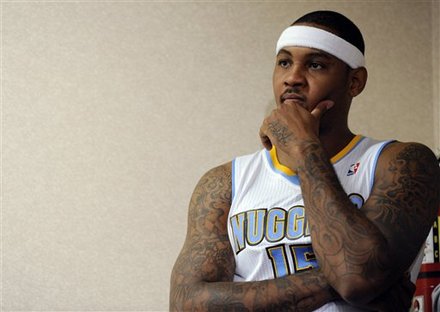 Carmelo Anthony wants to be in New York right now. He’s not. Instead he’s going to be playing bully ball against (in turns) Andrei Kirilenko, C.J. Miles, Raja Bell, probably Jeremy Evans, and (shudder) Gordon Hayward. Physically he’s bigger than all of these guys. He’s also still one of the best scorers around. Denver is going to be without Chris Andersen and Kenyon Martin – so the Nuggets will rely on Melo for more than just scoring today. Hopefully forcing Melo to play defense and bang for rebounds will make him use some energy outside of personally destroying us from midrange and in the paint. 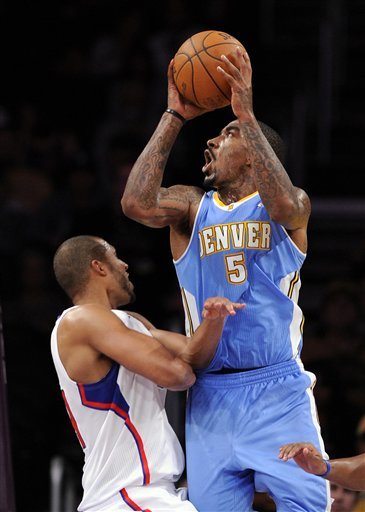 The Pepsi center can get really loud, and with the triumphant return of George Karl they will only be louder. They Nuggets are a streaky team, and when they go on runs they only become increasingly confident and daring. This *should* go against them, but as we saw in Game 1 of the playoffs last season (and to a lesser extent, Game 5 as well), their role players can really elevate their games during this frantic time. J.R. Smith is going to play in this game (he has a minor injury), and he’s exactly the type of guy who can cause problems. Hope Jerry takes time outs at the right time, and more than that, that our guys can match their emotion and quiet their crowd down by answering any demonstrative runs that they go on. 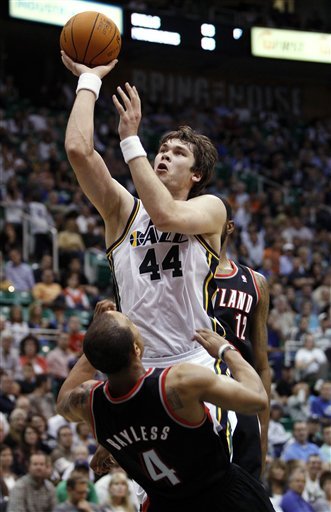 Utah has to win this game in the paint. They are without two of their rotation bigs, and we’re bigger than we’ve ever been (even though we don’t have Memo active). Nene is going to be a guy who can get 16 and 8 in his sleep. Renaldo Balkman doesn’t scare me. The big differences this year are going to be the additions of Al Harrington and Shelden Williams. Williams is a Dukie power forward, so we need to keep an eye on him at all times. Harrington has a very diverse offensive game (complete with three point range). I honestly don’t think that either of them are able to defend Al Jefferson in the paint. I also don’t think either of them can box out Fesenko or keep a body on Elson. If we get a number of tap backs and offensive rebounds we should be able to grind their injury depleted front court into the ground. Of course, they are going to shoot a lot of threes to make up for their lack of overt size right now. Billups, Anthony, Harrington, Lawson, Smith, and Aaron Afflalo will all bomb from deep without thinking twice. How well we rotate, and how well they get our help defenders to commit on guys will win this war.

Gordon Hayward . . . which Gordon will show up? The other team is going to try to attack him when he’s on the court. Hopefully he doesn’t get down, and plays a good game where he does not hesitate to shoot when he’s open. Raja Bell does not hesitate, and he makes his open threes.