"It's only..." You hear that a lot since it's just the first game of the season or it's just the pre-season. At some point you have to stop putting qualifiers on things.

If you'll let me use "it's only the first game" one more time. Just how bad was the Jazz offense last night? They currently rank last in offensive efficiency with 89.1 points per 100 possessions. This is where you say it's just the first game. That will go up (they've been at 110 the past two seasons) but it gives you a good idea just how dreadful the offense was last night.

That puts them last in the league so there really is nowhere to go but up.

You know, as long as we're going to carry on this Elder Hayward comparison, then we might as well take it all the way. If that's the case, then he needs to break up with his girlfriend so that he can focus on the work,

Either that or get married. But that would happen until the off-season, right? If she's the one, she'll wait for him. Okay, enough with the missionary parallel for now.

This is from Deron's redesigned website. I think I would have gone with a different background pic. 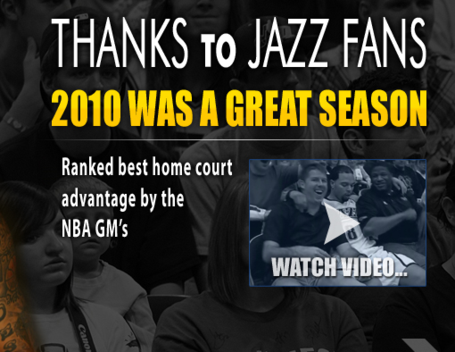 One note I forgot from the recap, though having Dantley coaching in last year's playoffs helped the Jazz, I would much have rather won with George Karl there. It was a great sight to see him on the sidelines again and to see the kind of reception he received on the night.