I struggled to come up with a suitable name for this. Celebrity Deathmatch was already taken. So I settled on a non-surprising Seinfeld fictional movie title, Death Blow. "When someone tries to blow you up, not because of who you are, but because of different reasons altogether!"

So while we won't be able to enjoy a physical match-up between the radio guys (maybe in the future?), we'll see which one each day gets delivered the Death Blow by you, the voters. Because man, they had it coming.

Here are the seedings based on your votes. 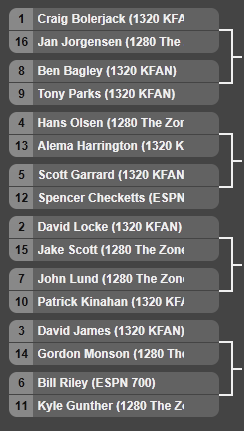 Up first is Bolerjack vs. Jorgensen. Get voting.