Yesterday's vote between Bolerjack and Jorgensen had a predictable result as you delivered the Death Blow to Jan by voting for Boler 76% of the time.

We also made a slight change. It seem Jon Lund skipped town for Portland so we've inserted Kevin Ferguson after a quick poll ranking on him. It changed things just a bit (click for bigger) 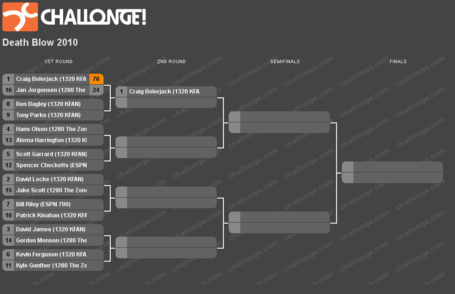 Coincidentally, he'll be up for voting today against Kyle Gunther from 1280. I'll also switch the voting button to use SBN's native poll instead of Google. I used Google's because I wanted to hide the results until the next day but I could see someone voting all day long. SBN's makes it a little harder to do that. It's just an Internet poll though. If you're voting over and over again for this kind of poll, you need to re-evaluate your web habits.

So who'll get the Death Blow today? Looking back at this, I should have had you vote Survivor-style so that you could deliver the Death Blow instead of a passive-aggressive Death Blow. I don't want to confuse things now, so maybe next year. Or maybe we can do it if we do one on the local newspaper/TV sports guys.