I missed this on NBA.com but thanks to TrueHoop for bringing it up.  They posted the results of the GM survey that they do each year on NBA.com.  Some Jazz highlights,

Speaking of Matthews, he continues to impress in Portland (damnit).  We knew he would.  The crappy thing here is that his huge contract doesn't have as big on an impact on the Blazers ownership as it does with the Jazz.  If the Jazz had kept him, we would have likely dumped salary and added some talent with it.

If you want a little comfort, know that his performance was against the Clippers in a meaningless pre-season game. Never mind.  He's going to be too good this season.

Korver also impressed in his debut with the Bulls.  Who is this guy that's getting to the free-throw line 7 times and creating his own shot?  Really?

Good news if you're a AK fan; he's going to give the Jazz fist billing to re-sign him,

At the end of your career, you look at your family and where your kids go to school, rather than whatever you want.

If he's not gone by the trade deadline, I hope they get an extension done for him.  If he is traded, I could still see him coming back to Utah next season (or whenever we play again)

Great article on Francisco Elson from Tim Buckley.  After his brother died on the court,

"He (Patrick) told my mom if I ever played that I never should stop playing," Elson said. "They (his mother and sister) told me he didn't want me to stop playing basketball.

"He talked to my mom, and he told her I had something going on, because I was fast. He probably saw something nobody else saw."

Well, maybe there were a few.

Francisco acknowledged as much, though not before a deep breath and a long pause.

"Other people," he said, "also said, 'Why don't you come back and play basketball? Your brother probably would have liked it if you came back.' "

Before Orsine would give her blessing, however, she demanded a battery of tests.

Just to be sure.

I finally played NBA 2K11 last night.  Just when I thought that I had finally started improving my skills, the game humbles me.  Maybe it's just me, but I manage to stay tight with most teams in All-star mode but get killed in the fourth quarter each time.  Is that a cheating AI?  You know, nothing drops for you and they start nailing everything.

The things you might have read about getting picked off all the time is true.  You can't pass unless there's a clear path between you and the other guy.  Otherwise, someone gets a hand on it.  I still can't run a pick and roll yet.

Here are some pics from a couple of my games.  I have most of the players there.  I'll have you know that Millsap shut down Boozer including the sweet block below.

And they did CJ wrong in this one with his rating.  He's the second-worst on the team overall, just ahead of Evans.  They ding him a lot for hustle and rebounding.  He's not in the 80s, but he's not a 57 either.

The roster includes everyone that was signed as of August 15th, so no Fesenko yet.

I haven't started the Jordan mode yet, not sure if I want to, even if it's to make him fail.

Overall, in my limited play, it's well worth the $60.  And when NBA Jam (some unlockable players) comes out for the XBOX, there's going to be no sleep. 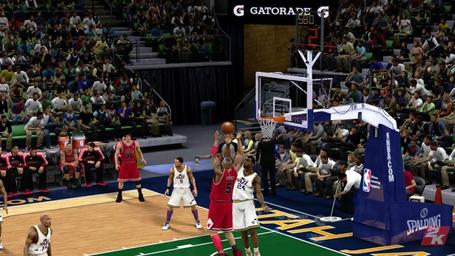