CJ Miles' 20-point game last night against the Kings was the second time in his career he's put up back to back 20+-point nights. The last came almost exactly two years ago in games against Phoenix and Milwaukee at home. It's worth noting that those were two games that he started rather than coming off the bench.

Any chance he gets three in a row against the Hornets? He's come close to 20 a couple of times against them in the past couple of seasons. He'll certainly get the chance given his recent shooting, but I'm more interested to see if he continues his smart play and gets the points in the system.

This is a pretty sweet bobblehead: 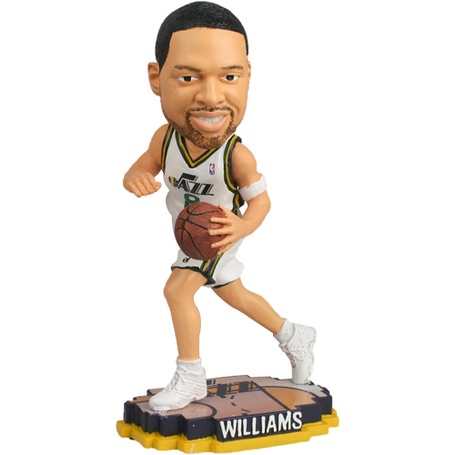 This is why it was disconcerting to see Deron come back in the game last night with the Jazz up 20 in the fourth quarter,

Williams acknowledged after the win over the Kings that his shot is off and his legs are not providing their normal lift. In addition, an early-season Jazz journey that has been heavy on games - and thrilling but emotionally and physically draining comeback victories - has clearly taken a toll on the All-Star guard.

What's been most alarming is that he hasn't been able to finish once he gets into the lane. Last night, he had a couple drives where he could have finished with dunks but just didn't have it.

He could have used a break last night to rest his foot (mainly) and other ailments. I don't know how much 7 minutes of game action would have saved him in the overall scheme of things, but he obviously wanted out of the game late yet they couldn't quite make the Kings go away.

He won't be getting much rest this week either with the Hornets and Lakers coming in and then heading to LA to play the Clippers on a back to back.

In last night's game, they were showing signs from the crowd and one included this website, http://letfesdunk.blogspot.com/.

There's not much going on on the website but if you're a fan of unintentional, sometimes intentional comedy, Having Fess in the dunk contest would be right up near the top. I would like to know what kind of dunks he would try and what props he would incorporate. I'm thinking he could put Superman to shame (and actually make a dunk and not just throw the ball in the hoop).

Perhaps he, Biedrins, Shaq, and Dwight could do a FT contest? Winner would get the other's salaries?

I guess what it comes down to is that Fesenko needs to be involved in All-star weekend somehow. I think the league, and the world really, is missing out otherwise.