To steal from Dan Patrick, "The replay confirms what we already knew..." that Raja Bell is by all accounts a great teammate. In Genessy's latest article, he talks about Bell's shooting contest with Fess, AK's term of endearment for Bell, and some of Sloan's thoughts,

Sloan also appreciates how Bell takes superb care of his physical shape by working in the weight room and in the gym.

That sounds an awful lot like #12 and #32. This is good news considering that Bell will be nearing 37 when his contract is done. Stockton and Malone were written off as well as they got older but if Raja continues to take care of himself, there's no reason why there should be much of a drop-off in the next three seasons.

This is a good article in its own right, but the only reason I share this is for this quote from Sloan after the team went 1-2 after its first 3 games,

"Everyone wanted to throw dirty on us."

Now, I'm guessing that this was a typo and that it should read dirt instead of dirty, as in everyone wanted to bury the Jazz. But dirty makes this an infinitely cooler quote.

I wasn't looking at the losses themselves so much as how poorly we played in those first two game. If they would have lost and still played hard, it would have been a lot easier to take. Denver and Phoenix are good teams so 2 Ls aren't anything to hang your head for, but the Jazz looked like they had just picked up the ball that morning after a four-month holiday.

Is anyone concerned that CJ hasn't tweeted in a week?

That was his last one. Is he just burned out? Broke his phone? After tweeting almost everything that was going on, it's weird that he stops cold turkey. If I hadn't seen him play on Sunday, I would have put in a missing person report.

Finally we get some game action tonight. Here's a graph to indicate actual days between games and how many days it actually feels like. Actual days runs across the x axis with what it feels like running on the y axis. 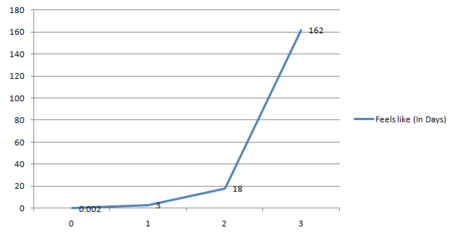