I'll beat this one more time. With the win over Milwaukee, the Jazz cap an imporbably month of November, going 1413-3. I can't tell you how dumbfounded I am at that. The downside is that I don't know how the Jazz can have a better month the rest of the season.

The upside though is that we've seen that this team can play well and at a high level. After the first two losses to start the season, the perfect pre-season record and optimism that came from the off-season signings (and non-re-signings), looked like the biggest chunk of fool's gold we had ever seen. At best it was going to take a couple of months for the team to come together.

Instead, this team has come together quicker than most imagined. The vets are stepping up both on and off the court. Jefferson looks better each game with the team. Deron is taking it up another notch from last year. The new guys are fitting in and filling their roles.

This appears to be a great team where everyone contributes, everyone knows their place, and we have different players/units that pick it up each night.

Really, they've almost set the bar too high for me now. I'm not expecting to continue at this winning percentage, but not that they've shown they can do it, playing some of the toughest teams in the league, anything less will be disappointing.

Think about all of the huge wins this month. Even if you take out the double-digit comebacks, simply sweeping the east-coast swing, beating LA, beating OKC on the road, etc. those wins in themselves are huge regardless of how they won.

And with the coaching staff the Jazz have, I don't think they'll let the team settle for anything less than what they've achieved so far.

Hoopism put together word clouds for each NBA team based on all-time minutes for each player. The bigger the player's name, the more minutes. No shocker for the Jazz but cool nonetheless. Click through for the rest of the teams and to download the pdf. 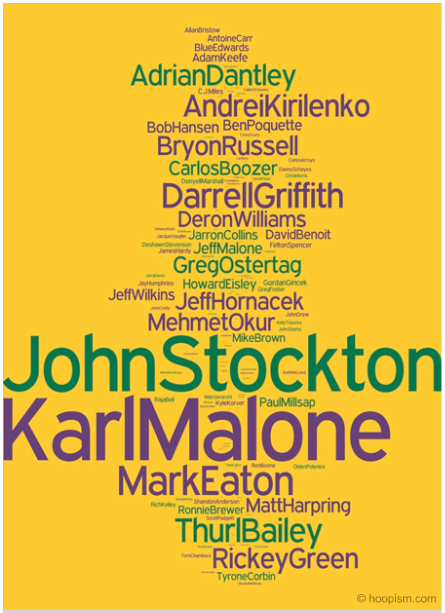 In former Jazzman news, it looks like Wesley Matthews will get the start for Portland over Nicolas Batumm as the Blazers try to shake things up and snap out of their funk. Most over at Blazersedge though seem to want Batum in the starting lineup over Roy, who's hampered by his knees.

Meanwhile, multiple people are reporting that Boozer will finally give it a go in a game tomorrow night against the Magic. It will be interesting to see how he impacts them. They're playing pretty well, putting up a 9-6 record. Their 106 offensive rating puts them 17th in the league while they currently sport a 102.7 (8th) score on the defensive end. Logic would suggest that the offensive number will improve while the defensive score might slip with Boozer's return. We'll see how much Noah can help with that. They might play well together and not see any slippage.

If you're in the SLC, t he Jazz are going to be doing a Toys For Tots drive on Wednesday at the ESA when the Jazz take on the Pacers and again on Friday against the Mavericks.

Maybe the Jazz could donate all of the balls they launch into the crowd that day to Toys for Tots?

Tuesday open poll.. What was your favorite/biggest/best Jazz win of November?