It's Not Lame, It's The Ten Days Of Christmas. On The Tenth Day Of Christmas, The Utah Jazz Gave To Me...

Share All sharing options for: It's Not Lame, It's The Ten Days Of Christmas. On The Tenth Day Of Christmas, The Utah Jazz Gave To Me...

It's that time of the year again where we count down the top Jazz stories of the season. Because the end of the year normally coincides with Christmas, I make a hybrid top-ten and twelve days of Christmas mash-up. It's not lame, it's the ten days of Christmas. You can read previous years here. Without further ado...

Last season, the NBA announced their Hardwood Classics series where the Jazz and other teams would wear some of their retro uniforms. The Jazz used it in part to see how receptive the fans would be to the classic uni from the team's days in New Orleans and early days in Utah. By all accounts, it was a rousing success both on and off the court.

I'm not privy to jersey sales numbers, but from what I heard they were a popular item. I even made it my first jersey purchase.

The team excelled when they wore them. They put up an incredible 10-1 record when they harnessed the power of the green and yellow. The lone loss came against the Lakers but avenged that loss later.

All of this was in preparation to bringing back the old colors and note that a lot of fans had been clamoring for. The Jazz made a move away from the note for the 1996 season. The new logo featured the a prominent mountain background while changing the color scheme dramatically. The mountains better represented the location in Utah while still paying homage to the team's roots with the J taking the form of a saxophone. It was arguably the team's most successful uniform as they went to the finals in two straight years.

After Stockton and Malone left the team, the uniforms went away from anything that distinguished Utah from any other team by eliminating the mountains and the note while moving to a blue/light blue color scheme:

While the unis were clean and well-designed, they had no character to them at all. The Jazz kept the mountain logo but it no longer appeared on the jerseys. You could have put any team's name on them and it wouldn't have mattered.

Then, back in February, we learned that the team was exploring the option of bringing back the note. It would follow the old note design but have new colors of green, blue, and gold.

Greg Miller teased us with the first peek at the new unis. Then we finally got a look at the new logo officially. Later came the uniform reveal: 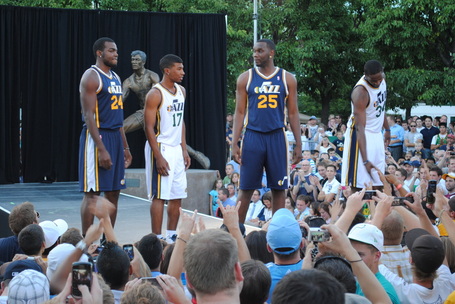 It's an excellent combination of the old note with a modern look. I'm a big fan of both unis. My only wish now is for the team to leave it as is and not go away from it again in the future.