Memo will be joining the team on the four-game roadie starting tonight.  There's always the chance that he'll play, but I think he's just warming up for the 27th.  He can do shoot-arounds  and a practice or two with the team before returning home.

He would be nice to have against Milwaukee, but the Jazz don't need him really on this road trip.  He'll get in some work and then have four days off to get ready.  I'll stand by my original projection and say he makes his most excellent return on Monday the 27th.

UPDATE:  And just as soon as the DB goes live, it's announced that Okur will play.  Danny Larussa is going to fight!

At least we'll have one center back.  Elson returns from his government-mandated mini vacation in Canada.  He had to stay there for a couple of days to get his visa worked out.

This is going to twist a knife in me for some time:

NBA Sophomore Rankings: Top 20 - ESPN
4. Wes Matthews, Trail Blazers Take an athletic and skilled guy, snub him in the draft, then turn him loose. It doesn't matter that Matthews is already making more money than any other player in his draft class, he still plays as though he's just trying to make someone's summer league roster. Matthews is on a tear in December, racking up more than 19 points per game and 2.4 steals per game with at least one steal in every game this month. And how does 47 percent from 3 and 89 percent from the line sound? Great, if you're a Blazers fan, especially because he doesn't rely on his shooting to make an impact.

I couldn't ever root against Wesley, I hope he does well.  But losing him is going to sting for a long time.  What's worse is that he's making a name for himself as a Blazer though he's the same player as he was for the Jazz.  The team should get a finder's fee for this one.

It's only take 6 seasons, but this is the closest I've seen Hornets fans put Deron next to Paul,

2011 All Star Game Fan Voting- 1st Round Guard Returns - At The Hive
It's kind of weird. As staunchly as I've defended Chris Paul as an All-Star starter in years past, Deron Williams has a case this year. Williams is playing almost 4 minutes a night more than Paul, and has a usage rate almost 6 percentage points higher. That has to count for something.

Ultimately, I still give the edge to Paul. He's been the league's most efficient player by most measures, and it's enough to cancel his lower usage rates. More importantly, he's having a fantastic defensive season- at the head of the Western Conference's top defense. But Williams is right up there with him; a lot can still change between now and February.

Fun with Google search.  I'm not signed in when I do these so you don't see some of my uh, personal, searches on the Jazz.

For as long as I can remember, whenever I've searched for Deron, "Deron Williams wife" has always come up first.  Only recently has Hayward and twitter moved ahead.

I only did the ones that were somewhat interesting.  Elson, Jefferson, and Watson just had stats, etc. 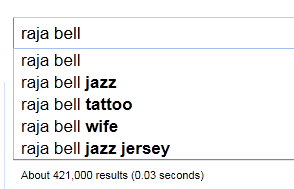 Again, I don't know how "Raja Bell wife" isn't first on the list. 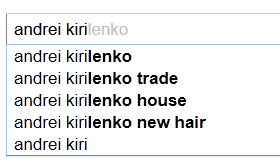 Andrei, if your hair is making it to the top of Google searches, you have a problem.  Also, I don't know how "andrei kirilenko freebie" or variants aren't on top. 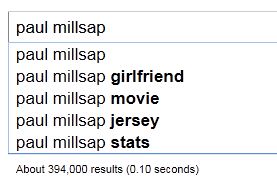 See, that's what I expect.  People are trying to find out if Sap has a lady.  I don't recall every hearing that he has a girlfriend though. 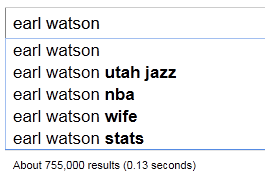 Watson is recently divorced from his wife but I can see why people would still be Googling her.  I had no idea she was the daughter on "My Wife and Kids." 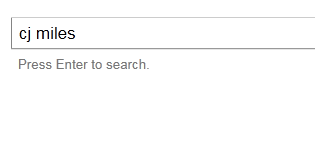 No, I didn't cut off CJ's results.  You see, as you may know, there's another certain CJ Miles out there that's famous for something else.  Google's instant search won't show results for certain things and this is one of them.  You don't want Google Images returning those kind of results while you're at work when you're just trying to find out how CJ did last night.  On the court. 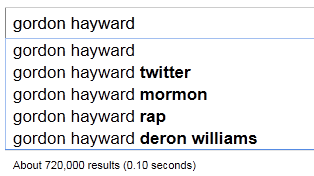 If Google says it, it must be true, right? 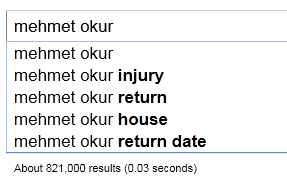 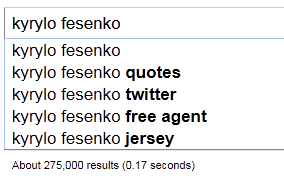 See big guy, everyone's clamoring for your quotes and twitter. They're a natural combination.  Make it happen.