The Jazz move up three spots in Ford and Hollinger's future power rankings (insider).  They clock in at #5:

They improved the most since August in the Players category,

The teams ranked ahead of them are the Heat, Thunder, Lakers, and Bulls.  They jumped the Magic, Blazers, and Rockets.  The Blazers and Rockets both took hits in the Players category.

Putting aside fandom, if you were just starting to follow the NBA and wanted to start following the most promising team, I think this list is right there.  I've thought about what if the worst happened, and the Jazz suddenly got contracted (if they moved, I don't know what I would do).  If I still followed the NBA after that, who would become my new team?  As an existing NBA fan, there's no way I would follow the Heat, Lakers or Bulls.  If I was a new fan, I could see how someone would want them to be their team.

This list can fluctuate quite a bit though given trades, injuries, ownership, etc.  The very first power rankings ran in November of 2009 and the Blazers were on top. The lowest the Jazz have been was #8 and have been either #5 or #6 in the others.  That speaks volumes for the stability of the franchise.

Clark has an interesting trade idea to land Iggy and get under the luxury tax.  (NSFM)

Are you a glass half full or a glass half empty kind of person?  The Jazz haven't won back to back games in nearly three weeks when they beat the Pacers after beating the Bucks.

However, they also haven't lost two games in a row since the season started.  They've been able to come back from each loss since then and pick up a win.

They've alternated Ws and Ls for the last 9 games.  That's the longest such streak since November of 1994 when they also had a streak of 9 such games.  The good news is that they went on a five-game winning streak after that last W of the 9.  The Jazz are certainly in that position given their schedule to close out the month.

Now that Memo is back, we're going to have an inactive player each night.  Against New Orleans, it was Jeremy Evans.  Against Milwaukee, it was Gordon Hayward, something he called humbling.  Ross Siler says that Hayward has to play given the investment that the Jazz have made in him.

Given that you can only suit up 12 guys for a game, someone has to sit.  Sloan stated in the above link that he doesn't know who that's going to be.  I think it's going to vary each night given who the opponent is.  Neither one of them are leap-frogging one of the guys ahead of them on the depth chart.

So could a D-League assignment come for one of them?  Given that they only have 13 guys on the roster, I think they hang on to both of them in case of injuries, etc.  Maybe if the Jazz make a move and bring on someone else, then one of them might get sent down.  Until then though, it's going to rotate.

These screencaps come to us from moni's sister (A Spurs fan; Every family has a black sheep).  Malone/Sloan and Stockton/Sloan are #1 and #2 all-time in coach/player combo wins.

Popovich and Duncan are coming up fast though.  They could pass both sometime next season, you know, if there is a next season. 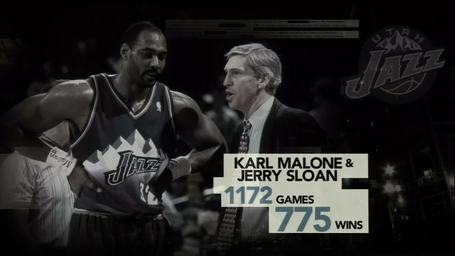 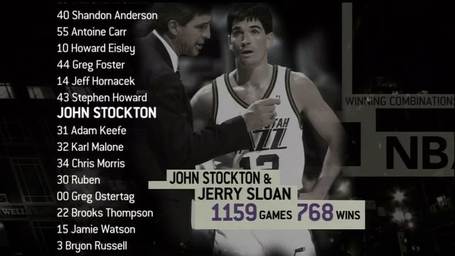 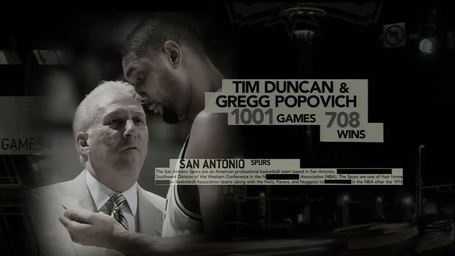