Big Al will make his return to Minny tonight.  He said he fears the LeBron treatment but I doubt his return is met by anything than a loud ovation from the crowd.

"I always knew it was fun to win, but I didn't really know that until now," Jefferson said. "Know what I mean? We play on ESPN, play on TNT. We ain't do none of that the last three years, or really the last five years if you include Boston. That's a new experience for me, to be on the main stage. The only bad thing about it is now when we do lose a game, it stays on me a lot longer, until we play again.

"Last year, losing felt like normal. Now it hurts. That felt strange at first, but I'm getting used to it. I'd rather have that any day. Trust me, I know."

Breaking a player of that losing mindset has to be more work than learning a new offense and playing with new teammates.  Basketball is basketball and you're going to be able to learn a new system.

Learning how to win, and more importantly, expecting to win probably takes a lot longer to master.

Maybe the TWolves won't be so pesky this season given that they no longer have Jefferson and Ryan Gomes.  They were the two biggest Jazz killers the past few seasons points-wise.  Al had 6 of the top of the top 17 scoring games while Gomes had 4.

The Jazz are 7-5 against the Wolves over the past few seasons.  Given the teams Minnesota has had, that's a bad record for the Jazz.

Of course they now have Kevin Love exclusively who is wreaking havoc on the league and terrifies me.

Yeah nor nay on Deron's new color scheme for his shoes?

I don't know if this pic has been around for a while or not, I haven't seen it.  The blog I got it from had a date of December 17.  It may be old, but you could write a book on the history of our players' hair. 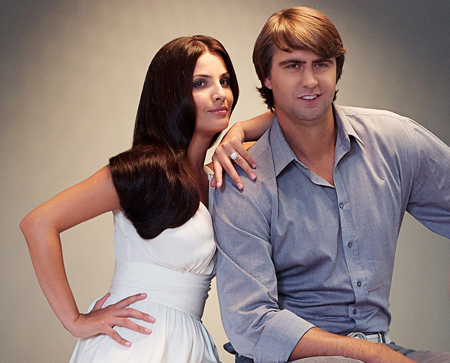 Should the Jazz win tonight and Sloan passes Pat Riley for wins, I would imagine the post-game quotes possibly going something like this:

Reporter: "What are your thoughts on passing Pat Riley for third on the all-time win list?"

Sloan #1: "Well, I wish we would have played a little harder in that third quarter when we let Minnesota get back into the game.  But Love is a terrific player and he's going to do that to you. "

Sloan #2: "I've always said that this was a player's game.  They're the ones out there on the court playing the game.  You're only going to get as many wins as your players get you."

Sloan #3: "I haven't given it much thought.  In this business you can be out the door tomorrow, so I don't dwell on these things."

Sloan #4: "Didn't we just talk about this two days ago?  Why are you bringing this up again?"