Now that Wesley Matthews is back again for the Blazers tonight (first regular season game), the circumstances surrounding his departure are coming up again, namely that he would have accepted about a $4M/yr (or fair as Wesley stated) deal had the Jazz made an offer. Matthews and his agent insist that the Utah never made that offer.

O'Connor wouldn't comment on the situation this time around, however, back when it went down he insisted that the team had made an offer,

Kevin O'Connor usually chooses his words carefully but he was blunt in refuting idea that Jazz didn't try to make offer to Wesley Matthews.

Those were Siler's words back when he was still with the Trib. Siler also tweeted,

O'Connor told reporters to call Matthews' agent and ask what really happened behind scenes.Jazz felt there was little attempt to negotiate on Matthews' end.

Though the Jazz have told CJ Miles and Paul Millsap, both restricted free agents, to go shop for the best deal they can find, Matthews' situation was a little different. Because he wasn't drafted, he's not restricted by the same financial pay scale that they were. So when they tell the previous two to go find their best offer, they know what the max is another team can offer them.

There was still a max for Matthews as well (the full MLE), but I would have to think that the Jazz would have made an offer for Matthews. Given that he could make more than even high first-round picks, the Jazz couldn't afford to let find an offer first and then match.

We're not privvy to negotiations but it seems as though the blame for Matthews not being on the Jazz falls on both parties.

Found this in brand new condition with the tag still attached at my in-laws house, 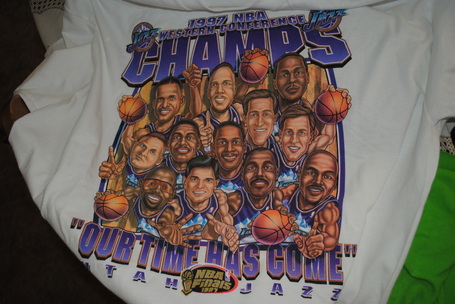 The only break longer than the one we just had will be the All-star break. I would like to thank the schedule organizers for not making my Christmas any more complicated and hectic.

The Jazz will have 3 games in 4 nights coming up though as they'll try to consume the Clippers sandwiched between two Blazers games.

January will feature 16 games and the Jazz should be favorites in all but 2 of them (@LAL @BOS). This is the time of the year where the Jazz usually go on a tear and the season starts to fly. Before you know it, we'll be complaing about squandering the last few games of the season and missing out on the 3 seed.

I will finally have some time this week to set up an SLC Dunk NBA2K11 league this week. Also, I just got NBA Jam for the XBOX, so if you need some training fodder, hit me up at NinjaEight

Here are your leading scorers for the Jazz (PPG)

Here's the poll from the off-season when you voted who would be the team's leading scorer:

Who will be the team's leading scorer (PPG)?

So I wanted to re-do that poll: