Raja Bell turning down a chance to play in Miami speaks loads more than turning down Kobe (Standard-Examiner),

See, Bell, who played college ball in Miami, also turned down an offer to play for his hometown team. Granted, the Heat were trying to line him up before they landed LeBron James and Chris Bosh. But even then it seemed likely and the Heat saw Bell as the perfect complementary piece to their "championship" puzzle.

Even after Miami had its Big Three in place, Heat coach Eric Spoelstra sent Bell a few texts saying, "It's time to come play at home."

But apparently Bell wasn't interested in taking his talents to South Beach.

Thanks, but no thanks. Good luck, he wrote back.

You have to go back to the 2005-06 season to find the Jazz losing as many games at home by the end of the year.  So far they have 6 on the season and that year they had 8.

The Point Forward on SI.com has an interesting look at what the average MVP has looked like.  Karl Malone and Michael Jordan are the two oldest to have won the award.

So what does it mean for Deron's chances?  Nothing really considering that players way outside the averages have won the award.  What does matter though is the team's winning percentage.  72.3% is the average (59 wins) for the MVP's team.  The Jazz were at 78% and 74% in Malone's MVP years.

This year's team sits at 67% (21-10).  To get to 59 wins, they would have to finish out at 38-13.  I think it really would take a run like that to get Deron's name back into the picture when you consider the year guys like Dirk, LeBron, and Manu are having.

Should next season be the year we look for Al to explode?  Another Jefferson who switched teams, Richard, spoke in an interview last night played during the Spurs game how it took him a while to adjust to his new team.  He had a bit of a down year last season but has rebounded nicely this year.

With the exception of his free-throw shooting, his offensive numbers and rebounding percentages are at career lows.  He actually had a good November but has struggled this month.

Are we expecting too much from Al?

This is the type of hard-hitting analysis you've come to expect from SLC Dunk.  I've been playing NBA Jam since I got it for Christmas.  What I noticed though from the game (besides that it's awesome), is that the Jazz home floor is two-toned, just like NBA 2K11: 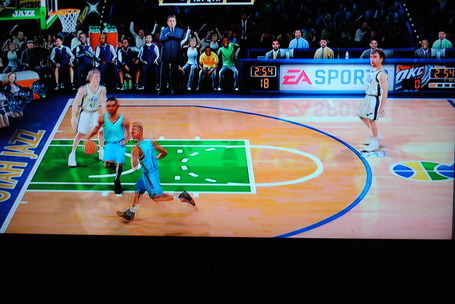 That's two different game developers (2K Sports and EA Sports) that put that into the game.  Given that the reveal of the court was delayed, it makes me wonder if the court wasn't supposed to have that look and that for some reason unbeknown to us, they made a last-minute change.

In other NBA Jam news, AK and Memo are the combo to play with in this game.  Memo is a near sure thing from three and AK will block just about everything and has some nice offense.