It looks like Memo will take off after Friday's game against Golden State to come back to Utah when Yeliz is scheduled to have a Cesarean section to deliver their boy.

That would mean Memo would probably come back to play the following Wednesday against Charlotte and drop 45.

Deron has traditionally had big Februaries. Almost every stat goes up for Deron post-All-star break. So how will the factor in given that the team's recent play has seen his number drop just a bit?

I think we see his assists take a big jump like they have in the past and his scoring stays about the same. Now that the All-star monkey is off his back, I think we see an even more determined Deron switch gears and focus on the playoffs.

Interesting trade that went down involving the Clippers and the Blazers. The involved players are Steve Blake, Travis Outlaw, and Marcus Camby. They're all playing on expiring deals so it doesn't look like there was a trade just to save one side money.

This will help Portland quite a bit as they look to improve their interior D with all of their injuries to their big men. Blake is expendable for them. According to Hollinger's trade take on the ESPN trade machine (via Blazersedge), Portland improves 4 games over the course of a season. So for the rest of the season, that would roughly be 1.7 wins.

For Camby's sake, here's hoping he avoids the injuries that have plagued the Blazers this season. He survived LA, so he should be okay.

Other trade notes, it looks like Denver, Houston, and Minnesota have made offers or have has talks with Chicago about Tyrus Thomas. If Denver landed him, that would be a pretty big get for them. I'm not sure who they'd have to give up though.

My favorite pic from the All-star weekend, 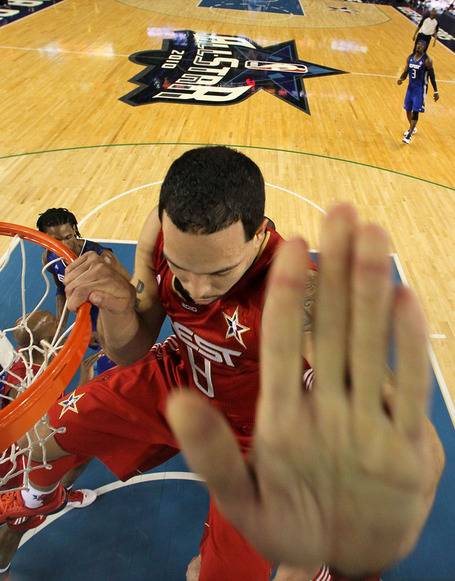