Share All sharing options for: While You Were Sleeping... 17 February 2010

It's the re-return of While You Were Sleeping. I tried it earlier in the season but it just didn't feel right. A loss or a win to another team in the West just didn't seem significant enough to bother writing about it the next morning. Who cares who won/lost when you didn't know if they'd be winning/losing later in the season?

But after the All-star break seems just about right to start it up again. We only have 30 games left on the season and only 12, 12! are at home. Although wins/losses in Feb+ count the same as they do in November, nobody seems to care as much until you're coming down the stretch.

So for those that don't know how WYWS works, it's a recap of last night's action of the games that impact the Jazz. So while Boston/Cleveland may have been excellent, I don't really care about it. You won't see a recap from any games we play because there's a separate post for that.

Last season I used Boozer for his reaction to each game. This season I used the KOOF. I think I'm going to mix it up a bit; you'll see Jazz players, LOSTies, and others.

Also, we're only going to hit on the teams with a chance to make the playoffs this season in the West. So that means no updates on the Clippers, Kings, Warriors, or Timberwolves unless they're playing another team.

Also, I'm hesitant to include any Knicks talk as it doesn't impact this season directly and it still seems like bad karma for that pick if we root for losses for a team that isn't a rival or even a team in our conference. That said, that pick could be a big deal for next season. So I'll talk about it until they win a couple in a row and then I'll stop until they lose a couple in a row. We'll see if my words have the power to alter the cosmos.

So, let's get going.

This OKC team should scare everyone, especially those in the NW division. Durant finished with 25 & 14 in this one (though he needed 28 shots). Where they're scary, besides Durant, is on defense. They will just shut you down. Does anyone really want to see them in a 7-game series?

Dallas on the other hand just made a big trade and will probably take a bit to work Butler and Haywood into the offense. That's still not an excuse for their 32% shooting.

Some quotes from the SBN blogs on this game,

It’s hard to watch the team collapse the same way, game after game. The Thunder are a young, talented team. Some might say they’re up and coming, with their 7-game winning streak, second only to that of the Cavaliers, who have 13 straight wins. This is no excuse for Dallas, who let their defense go soft as the game went on. The teams below them in the West are sneaking up, especially Oklahoma City, who is now just a half game back. The Mavericks, who have dropped 6 of their last 10, need to figure out how to best utilize their three new teammates, and fast.

Welcome to Loud City (no recap up yet)

Backstory: As Zorgon noted last time we met up with the Mavericks, this is turning out to be quite the fun match-up between teams. Then again, we're 0-2 against Dallas this season and 4-22 against the Mavs since the 2003-04 season, which pretty much sums up precisely how successful the franchise match-ups have been.

That tide could be changing.

So the overall reaction to this game? Let's go to John Locke (it was LOST night after all), 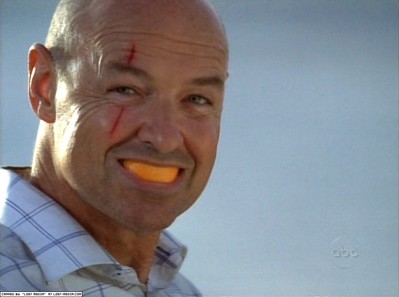 A bit of a bitter win for the Jazz. Dallas' loss, combined with our win, does drop them another game back of us. However, the Thunder are sizzling right now and are just two games back.

Stoudemire's last game as a Sun? They do play tonight against the Mavericks, but he's one of the more likely to get moved. Could come tomorrow before they play the Mavs. If there is a trade going to happen tomorrow or Thursday, I'm guessing that his future team, nor the Suns, would want him to get injured before then.

If it is, he had a solid ending to his Phoenix career with 21 & 10. Nash had a crazy game that saw him post 4 points and 16 assists. That was just one assist short of Memphis' total as a team.

Bright Side of the Sun,

There is a specific formula for a Suns victory. Defense, rebounding, bench play, and Jason Richardson. In Suns wins, J-Rich averages over 17 points per game. When they lose, he scores 10. Tonight, Rich may have played one of his best all around games this season if not his whole career as a Sun:

But tonight wasn't only about Richardson. The Suns win when they can achieve their special formula. And perhaps it's nothing scientific, it's just a team playing as good as they can. Tonight the entire Suns team put it together for a 109-95 victory over the Grizzlies in Memphis.

Straight Outta Vancouver (from the preview),

Phoenix is likely to be pushing the tempo in this one anyhow, though. They've dropped over 100 points in just about every game since Christmas, and the Grizzlies probably aren't equipped to be the team to stop them.

That's about right. The Grizz have now lost 5 straight.

Let's go to Sawyer for his post-game reaction on this one, 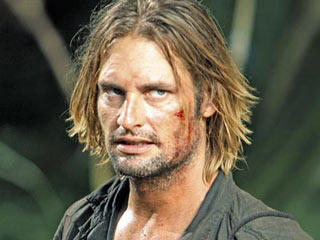 Sorry to bother you. Obviously you're upset that the Suns won here. Let's move on.

I hope you weren't expecting the Clippers to take out Portland in this one. Brandon Roy made his triumphant return with 4 points. Okay, so he was limited in minutes and they were just working him back into the mix.

It was Martell Webster's night as we went off for 28 points with 7 three-pointers.

The Clippers couldn't hang on to the ball as they gave it up 21 times which is an issue. Baron Davis had a night to forget with 6 points, 4 assists, and 5 turnovers.

The win kept Portland 3 games back of us. Seeing as how LAC is out of it, there's no joy in their loss. I do always find it weird though that after two teams make a trade (Camby for Outlaw/Blake), they have to play each other within 3 games. So if you're looking for the team(s) the Jazz could trade with, you'd have to look at GS, Portland, and ATL.

Let's see how the guys at Blazersedge and Clips Nation are handling the game,

The keys to this game were pretty simple. Portland limited L.A. to 6 fast break points, 8 points off of turnovers, and 8 points off of free throws. The 27 points Portland scored off of Clippers' miscues made up for all of that plus several DeAndre Jordan-inspired second-chance points. No easy buckets = no fun for the Clippers.

None. They're still reeling from the trade,

Camby for Steve Blake and Travis Outlaw and Cash - Really?

Speaking of Webster, let's check in with the little guy, 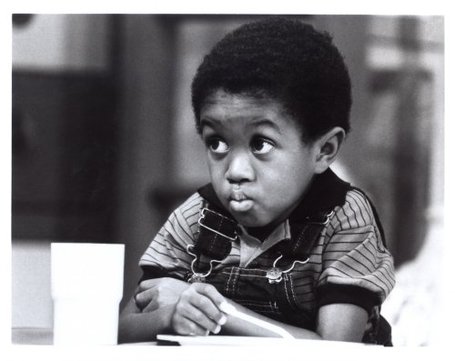 Yeah, not even puppy eyes was going to pull out a win tonight for LA.

I know we're not catching the Lakers. They're probably on the other end of the "should we recap their games" spectrum being as how what happens to them doesn't really impact us unless it involves one of the other teams. But I'll keep posting about it hoping for losses.

Last night was not one of those nights though. Kobe was out again and they still won by 10; and they should have won. They won by out-rebounding the Ws by a large margin and got to the FT line 12 more times. That helped to hold off a good shooting night for GS from the three-point line.

Shannon Brown led the Lakers with 27 & 10 while Anothony Morrow had 23 of this own. Stephen Curry must have left his shot at Dallas Stadium (it is pretty easy to lose stuff in there, you know, like Boeings, skyscrapers, and small countries) as he went only 5-21 overall and 1-10 from the arc.

Just read some of the players/coach quotes. Does it sound like any of them expect to win? Is there any accountability there?

An unlikely contribution on this front and others came courtesy of Shannon Brown. With 10 rebounds to accompany 27 points, 3 assists, 2 steals and a block (and only one turnover hallelujah!) Shannon had a career night. Tomorrow morning when you're reading newspaper coverage, count how many times it's suggested that he "redeemed himself" from his dunk-contest performance, as if falling short in that carnival sideshow is something that requires redemption.

Our four-legged friend from LA chimes in on tonight's game, 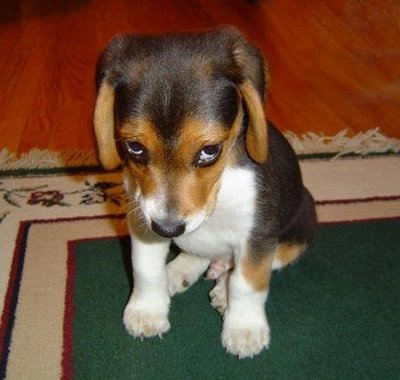 "Kobe kicks a puppy after every Lakers win." Honestly, how can you root for something like that? Very sad indeed LA beagle.

The Knicks were in this game after the first quarter. Unfortunately for them, they couldn't convince Stern to call the game right then. Instead they had to play the remaining three quarters which led to the Bulls going off for 60% shooting on the night with Derrick Freakin' Rose putting up 29 & 6 against the hapless Knicks. David Lee had 24 & 12 and is set to make a ton of cash this summer.

The Knicks could be a major player at the trade deadline including making a move for McGrady. However, it looks like Chicago could be the favorite to land the Rockets' overpaid non-playing player. That would help the Bulls a bit this season plus give them a lot of cap relief to go after one of the marquee names this summer.

Seth from Posting and Toasting deserves a better team to write for,

Save your theories about the Knicks trying to prove something in the face of rampant trade rumors. Your New York Knicks stepped onto the floor at the United Center, puttered around in circles for an hour or two, and got back on the plane to go home. The Bulls got absolutely everything they wanted. Derrick Rose was guarded by 5 or 6 different Knicks, none of whom could strike a balance between staying in front of him and contesting his mid-range jumpers.

Blog a Bull (no recap yet, if at all), they're looking at the trade possibly coming tomorrow as well,

So let's get a response from the man himself on this game, 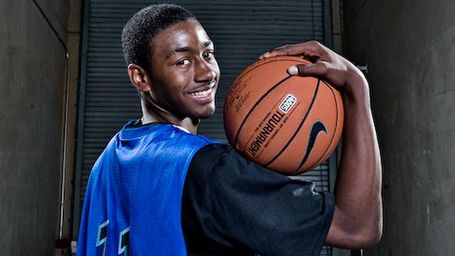 So if you're keeping track at home, that's 2-3 on the night. Not good but not an entirely terrible night. Let's go back to the island for the final call from Jack, 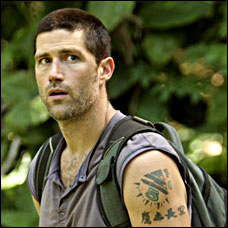 I don't know Jack, just give me something. This isn't that hard. I don't care about fate or destiny. Just give me some middle of the ground look. Pretend that Kate just left you but you're about to hook up with the flight attendant Julie.

Never mind. Don't call us, we'll call you. Jeez, why do you have to make everything so difficult?