Share All sharing options for: While You Were Sleeping... 18 February 2010

Lots of action in the league on Wednesdays normally and last night was no exception.

Just a putrid night shooting-wise from both teams. Indiana had 42% from the floor while San Antonio barely cracked 35%.

The Spurs won this game because they clobbered the Pacers on the offensive glass. When you're throwing up bricks at a rapid pace, there's going to be a lot of rebounding opportunities. Duncan had a crazy 26 rebounds with 11 of those on the offensive end. I don't know if he was just doing the tap drill to himself all night or what. All of those offensive rebounds by the Spurs led to 99 FGAs. They needed every one of them as they barely held on for the win.

The view from Pounding the Rock,

Both teams' shooting sucked - 35% for the Spurs and 42% for the Pacers. The three-point shooting was worse: 7-24 for 29% for SA and 5-19 for 26% for Indy. There goes your reason why both teams were held below 100 points. Or maybe... the Spurs defense did just enough to eke out a win despite the team itself struggling often to find the hoop, and with Mr. Fundamental shooting a horrible 4-23 (17%!!! My finals in calculus back in college was something like 36/200 or 18%, just a shade better than that! Just to clarify, I'm not that dumb... just a bad day at school all-around. And it was advanced calculus, by the way. Hmph).

And from Indy Cornrows,

The only problem was, the Spurs didn't bat an eyelash at any runs the Pacers threw at them. They just kept grinding and digging out critical offensive rebounds which spackled all of their blemishes on the night.

Nearly everything tipped in the Pacers' favor save for two critical parts of the game - the final score and rebounds.
While the Pacers held the Spurs to 35% shooting on the night and only made one less free throw than the visitors, the Spurs grabbed nine extra rebounds including 17 back-breaking offensive caroms.

Let's see what Gaines' reaction was last night after learning of the Spurs W, 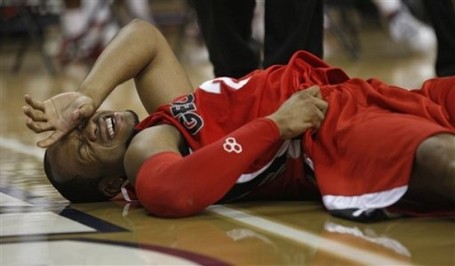 I don't know what he was doing in his old college uni, but the news hit him like a ton of bricks.

Glad Houston saved this offensive explosion for Milwaukee instead of against the Jazz. This game was all about the 3rd quarter as the Bucks got smashed, 43-14. Houston had 8 three-pointers in the quarter to Milwaukee's 5 field goals alone. Battier and Ariza were a combined 12/13 on three point attempts for the game.

And that was about it. You just don't recover from that if you're Milwaukee.

The Dreamshake hasn't put up recaps for a bit as they deal with the TMac trade rumors. But here's something they finally put up for the game against the Jazz,

So in a nutshell, the Rockets could have won, looked rusty after a long and much-needed break, and the Jazz were the Jazz. Everything you hate about them was in full effect tonight. And Deron Williams lovers, the time has come to admit it. He's gone over to the dark side. He's a Jazzhole now, and that's a taint you can't ever erase.

And from Brew Hoop,

After halftime the Rockets had enough of the competitiveness, and they proceeded to make seven three-pointers in a stirring four and a half minutes. A stunned crowd turned on their team as Houston turned a five-point halftime lead into a 34-point abomination by the end of a third quarter in which Milwaukee might as well have been cited for vagrancy.

I couldn't find a pic an any Jazz man throwing up, so this will have to do,

Amar'e hasn't been traded yet, and may not be now given that Cleveland traded for Jamison. If the Heat or some other team had reservations about trading for him, last night's 30 & 15 shows what he can do.

It wasn't enough though as the new kids on the block, Caron Butler and Brendan Haywood combined for 25 points for the Mavericks. Throw in Kidd's 18 & 10 and Dirk's 28 and you have a 10-point win for the Mavs.

That starting lineup of the Mavs, along with Jason Terry coming off the bench is a solid rotation but they don't have much after that. That may become an issue when you get to the playoffs.

Here's what Bright Side of the Sun had to say about the game,

This is where it got interesting, ladies and gentlemen. The Suns showed some heart and came out firing. With Nash on the bench, J-Rich took over. He scored 6 consecutive points and suddenly the lead was down to 11 with 9 minutes left to play. After a couple of three point shots -one by Dragic and the other one by Richardson- the Mavericks lead was down to 5.

The Suns couldn't make stops down the stretch as the Mavericks extended their lead to 8 and eventually to 10 again. A dagger from Jason Terry pretty much ended our hopes as the Suns let Dallas get 2 offensive rebounds with less than a minute to play.

Haywood gets the start and immediately makes an impact by locking down the paint and sending back five shots. Kidd gets into the act by chipping in a career-high seven steals, causing the Suns to lose their offensive continuity. Finally, the fourth quarter was won on the back of offensive rebounding. Every Dallas player was keyed in toward the end of the 4th, grabbing the offensive boards and securing another possession for the team.

It's normally a can't-lose situation when two playoff teams go head to head as someone's going to lose and you'll gain at least a 1/2 game on one of them. But with the Mavs being right behind us in the standings, I would have rather seen the Suns pull this one out. 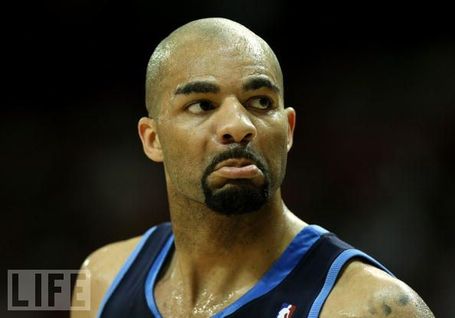 Chicago almost blew this one. They crushed them the night before but had to come back to beat NY. All is well though as the Knicks are now just a game or two from being in the bottom four of the league, 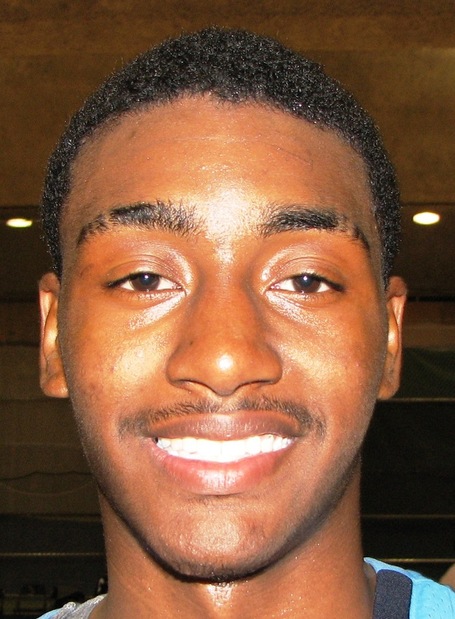