Some Last Thoughts On Ronnie Brewer To the Grizzlies

Share All sharing options for: Some Last Thoughts On Ronnie Brewer To the Grizzlies

No more chocolate milk commercials.  No more hearing about how his shooting stroke is different because of a childhood injury.  No more "definitely."

I wasn't even going to put up a trade thread today because nothing was suppose to happen.  All of the sudden Stein and Ford from ESPN start mentioning Boozer to Miami and it was on.  For the next two hours the NBA Twittersphere was on fire and the Jazz segment was on the edge of their seats.

So imagine how most felt when just as the Boozer talk was dying down this came across from Siler,

Word that Ronnie Brewer might have gotten traded. Again, trying to get confirmation.

Whaaaat?  Where did that come from?  I knew there had been talk last month about Memphis trying to get Ronnie for a draft pick; it wasn't that again, was it?

As it turned out, it was.

Let's just get right into it, was this a basketball move or a financial move?  I don't think you can say it's either one way or the other; it's a little of both.  But here's the question to ask that might clear it up: If the Jazz are under the cap, do they make this move?  I say the answer to that is no.

From what I've read, this was almost a literal last-minute deal.  The Jazz and Grizz brass have had discussions before about this same deal, so something like this could go down pretty quickly.  The previous offers had involved either the Lakers' or Nuggets' pick that Memphis has.  Kevin O'Connor turned those down and instead wanted Memphis' own pick.  That was turned down by the Grizz and that was that.

Up until 15 minutes before 3 p.m. Eastern, the Jazz were willing to head past the trade deadline with the team as constituted and pay the luxury tax.  O'Connor and Greg Miller have come out and stated that they're fine with paying the tax this year and possible next.  They liked the team as it is now and didn't see many options for change.

However, it sounded like had the Grizzlies been willing to give up their pick back in January, it would have been done.  So when they got on the phone today and called the Jazz, it was a pretty quick yes from the front office.

You can't discount the basketball side of things.  We did have too many wings.  The weird thing is that in the pre-season, we had just 1 healthy wing under contract, Brewer.  Korver was out hurt.  CJ got hurt in the first game in Europe.  Wes Matthews was just a training camp invite.

Once Miles and Korver came back, there was the jamming of the logs.

So why did Brewer go and not one of the others?  First and foremost, the Jazz weren't trying to get rid of any of them.  it was the Grizzlies who approached the Jazz and they wanted Brewer.

Why not CJ? The biggest reason is his contract.  He still has $7.4M owed to him over the next 2 seasons with a team option for the third.  Brewer is a restricted free-agent this year and depending on how he does, Memphis can match offers for him.  Second, if you were another team right now, would you want CJ?  Is there anything that he's doing right now that makes him coveted?  Nope.  Would you want to make that financial commitment?

Why not Korver?  Well, he's a bit more expensive this year plus he's an unrestricted free agent.  So if he leaves, they just gave up a draft pick for a two-month rental.  With Brewer, they can keep him if they'd like.

Why not Matthews?  I'm guessing the Jazz say hell no to that.  You're not going to get a pick right now that's a better value than Matthews.  He will also be a restricted FA this year and the Jazz can match offers for him as well.

From reading, it sounds like Brewer has been a target of the Grizz for a long time.  They like him a lot.

So if I were to put a percentage on the financial/basketball reason for the trade, I'd go with 75/25.  I don't know if that percentage means anything, but the financial reasons far outweighed the basketball reasons.  I really believe that if the Jazz are under the cap, they don't trade Brewer.  Sloan has been playing the right player in the right games when needed and has been choosing the right guy most of the time so I don't think having them all was that big of an issue.

So what will we be losing with Ronnie B gone?

You can also say that he's become a better passer this year.  His assist numbers are at a career-high at 2.8 per game (3.3 per 36) and his turnovers are at a career low.  It seemed like he was just getting into that new role of becoming a play-maker.

His other assets are of the intangible/unmeasurable kind.  He's freakishly athletic, a great finisher, great competitor, and from what we know, a great guy and a good guy to have in the clubhouse.

So what won't be missing?

Let's face it, Ronnie B was not an offensive threat, at least not outside the paint.  Take a look at his Hot spot chart from NBA.com, 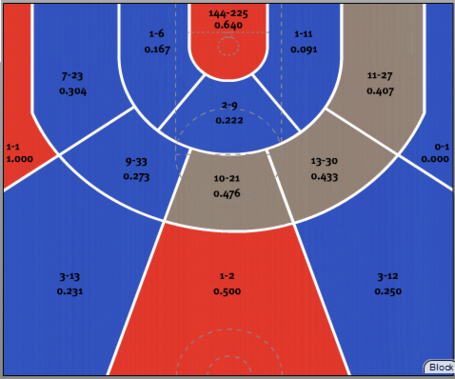 And compare that to Matthews': 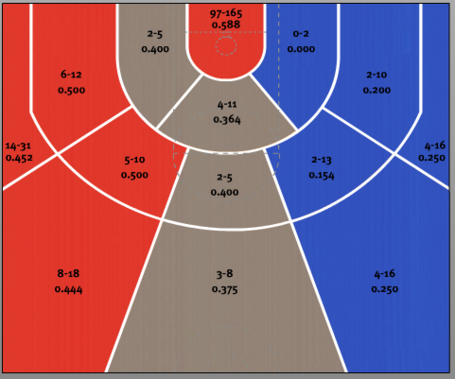 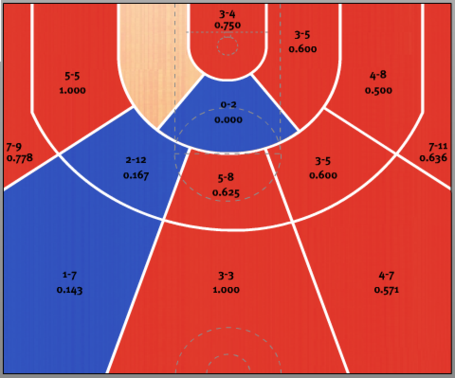 Offensively, Brewer is having his worst output of his career.  Almost every percentage and number is down this season, even per 36,

February hasn't been kind to him at all.  His minutes are going down and isn't doing much to earn more PT.

For as much as we talk about needing some help to compete with the Lakers' length and building towards hanging with them, Ronnie doesn't do much to help in that regard.  Kobe basically sets up camp in the lane and doubles whoever has the ball.  It has the affect of a 6 on 5 matchup and that's without including the refs.

He was entering that phase of needing a change of scenery to break out of his funk.  I don't know if he would have turned things around this season or not.  We won't know now if he could have done it with the Jazz.  I hope he does with Memphis because he deserves it.  There's no questioning his work ethic and commitment to the game. Maybe the Grizz have a special shooting coach that specializes in unorthodox jumpers.  Maybe he can slip on a basketball, fall on his wrist, and break it back into place.

The Jazz didn't seem bent on keeping Brewer for next season regardless of what happened at the deadline.  The team and his agent weren't close over the summer when they were talking about an extension.  The Jazz were content to, again, let the market set the price for their restricted FA.  Ronnie would probably get an offer of more than what the Jazz were willing to pay and may have been leaving regardless.  If that's the case, then a mid to late draft pick is certainly a reasonable get for him.  I think that's why the Jazz were so quick to do this deal because they knew they weren't likely to re-sign him and  they were getting what they could out of him.  The only other way Brewer was going to get traded was part of a larger package and that wasn't happening.

That said, you have to look at whether that pick was fair compensation for Brewer.  Can the Jazz get a starter with that pick? Not likely.  I guess if the alternative is no pick at all if he left after this season, then that's a good deal.

But when you add the time and money spent on developing Brewer into the player he is today, it doesn't hardly seem worth it.  Another question I'd like to ask O'Connor is when did you realize that Brewer was no longer a part of the team's future plans?  Was it after meeting with his agent?  Was it the play of Matthews?  The return of Korver?  When did they decide that it was worth letting him go and trashing the last four years developing him?  If he had been a better player in their eyes, then they would have made a more concerted effort to keep him.

We won't know for a while if this was a mistake on the Jazz' part.  Will he go on to be a Mo Williams-type post-Jazz success or will he follow the path of Shandon Anderson?  Compare Anderson's and Ronnie's stats through their first four seasons.  Pretty close?  There's no question that Brewer has benefited from the Jazz offensive system.  Will he have the same luxury elsewhere?  Somewhere he can cut and slash and move without the ball?

So what's my final opinion of the trade?  In some ways it makes sense but in others it stinks.  I can see where we need to get players like Matthews some more minutes, but when is having depth a bad thing?  We've been pretty fortunate with injuries in the regular season.  What if something happens again to one of the three left?  That leaves us pretty thin.  The same thing happened right after we had to get rid of Maynor.

I also don't like the brass' deny everything stratagem.  They denied having no Jazz games on KJZZ.  They downplayed the Boozer talk over the summer and today.  And they won't admit that this move was mostly a financial transaction.  If they do concede that it was financially-motivated, is that admitting a lack of planning or poor contracts on their part?  Jazz fans aren't dumb when it comes to these things.  They can tell if something is being held back.  Is it that bad to say, "Paying the luxury tax just isn't going to be a feasible as we thought and so we had to dump some salary to help alleviate that hit"?

Both O'Connor and Greg Miller have stated that the Jazz were willing to pay the luxury tax this year as long as they felt the Jazz were contending.  I would say the third seed in the west and winners of 15 of their last 17 games fits that definition.  It doesn't make any sense for the trade other than financial reasons.

So while the trade may work out in the long-run, it stinks because the Jazz aren't more forthcoming about it.

I hope Brewer has a long and prosperous career.