Share All sharing options for: While You Were Sleeping... 23 February 2010

Just a couple of games affecting the Jazz last night

The Mavs get a gimmee last night as they hosted one of the worst teams in the league in Indiana. Dallas shot just 38%. Haywood had 13 & 20 for the Mavs. He's been a pretty good pickup for them.

Of course the Pacers were playing without Danny Granger who could have provided a little more offense for them. He likely would have had the same case as bricktivits as the rest of the two teams though. Let's check in with Indy Cornrows,

The tone for this game was set early when both teams shared a barrage of rim clanking perimeter shots followed by a near-epidemic case of sloppy ball handling and passing.

I don't have the numbers to back me up, but I'm quite sure that the Mavs and Pacers combined to have more passes deflected or stolen in the first half than they had shots made. It was ugly, OK. Even Mavs' owner Mark Cuban found the play unpalatable at the half complaining to Clark Kellogg and Chris Denari at the half that his game at the gym earlier in the day wasn't as ugly as the first half.

Hmm, nobody from the winning team has anything up. Let's just go with this pic from a Dallas fan that won 10G on a half court shot (his shooting percentage was better than the teams), 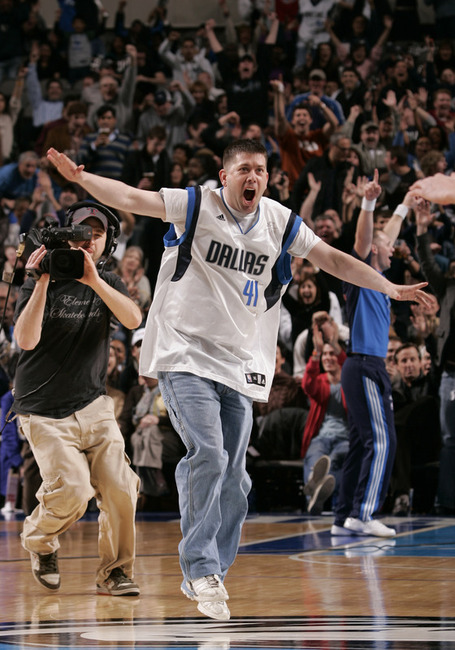 So the Pacers didn't help us out at all. Combined with our loss, the Mavs are just a half game back of the Jazz now. Maybe Indiana should sign this guy? Let's go to Sloan for the final reaction to this game, 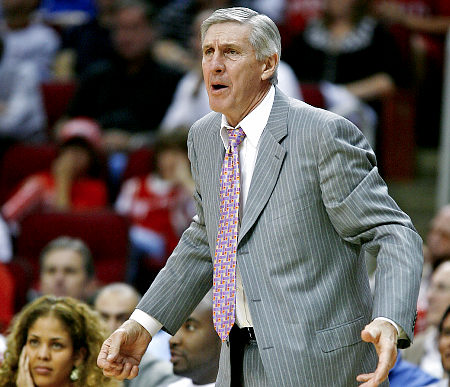 What do I want? Jeez, just a little help with the WYWS. Never mind.

New York has now lost 7 straight and are hanging out just above Indiana (so that loss isn't quite as bad), Sacramento, and Golden State. They're not going to "catch" Minnesota (remember how we lost to them twice this season? That was awesome) or New Jersey. But to have a shot at the three spot in the lottery? That's some sweet action.

From the proprietors at Brew Hoop,

While the small-ball Knicks once again hemorrhaged points inside to Bogut and company, New York's often explosive offense could neither shoot straight from outside (5/24) nor find a way to get around Bogut inside (five blocks for the third straight game). Lee managed a very respectable 12/13 scoreline, but his opportunities were largely limited to mid-range jump shots and his typical assortment of garbage buckets around the hoop. Bogut had no such problems, scoring 14 points along with nine boards in the first 11 minutes of the game alone as the Bucks led by seven after one period.

And get used to Seth from Posting and Toasting,

While double teams worked on occasion, the Knicks simply weren't going to stop Bogut with David Lee being the only player even close to qualifying as a "big man" on defense. Lee's arch-nemesis finished with 24 points, 20 rebounds, and 5 blocks, dominating the puny Knicks the way you or I would against a gaggle of second-graders. Consider Experiment 1: "Playing a lineup without any post defenders against one of the league's best 7-footers" a failure. The new-look Knicks fared pretty well on Saturday against the smaller Thunder, but were exposed all at once at the hands of Andrew Bogut.

Maybe NY would have fared a little better had the lights worked? 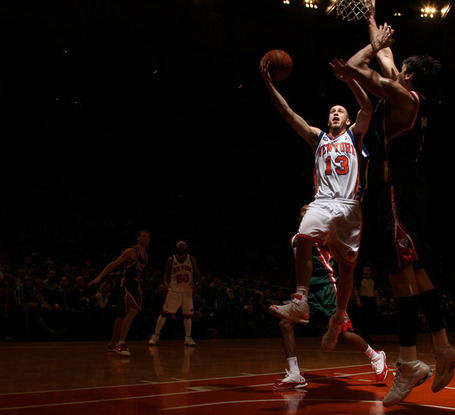 Let's go to Scott for the final word on this. Maybe he was part of a large league conspiracy to get the Jazz a good pick this year by laying the foundation for the Isiah Thomas years? Thanks Scott!