Well this explains a lot.  From the New York Times via Deadspin,

Michael W. Kraus led a research team that coded every bump, hug and high five in a single game played by each team in the National Basketball Association early last season.

In a paper due out this year in the journal Emotion, Mr. Kraus and his co-authors, Cassy Huang and Dr. Keltner, report that with a few exceptions, good teams tended to be touchier than bad ones. The most touch-bonded teams were the Boston Celtics and the Los Angeles Lakers, currently two of the league's top teams; at the bottom were the mediocre Sacramento Kings and Charlotte Bobcats.

The same was true, more or less, for players. The touchiest player was Kevin Garnett, the Celtics' star big man, followed by star forwards Chris Bosh of the Toronto Raptors and Carlos Boozer of the Utah Jazz. "Within 600 milliseconds of shooting a free throw, Garnett has reached out and touched four guys," Dr. Keltner said.

Boozer is always big into high-fives and fist-bumps.  That may also explain why he's always wanting to touch the ball after someone else has shot a free throw.  He's just trying to become one with the rock.

I'm wondering though if the reverse is true.  Maybe the good teams are touch-feely because they're winning.  Nobody wants to run and bump chests when you're down 20.

I've gotten on Boozer before for not being physical enough.  He's stated that he prefers not to initiate contact on offense and just go around guys.  However, this year we've seen plenty of physical play from him, coincidence?

Looks like Boozer isn't the only one who likes to hug. 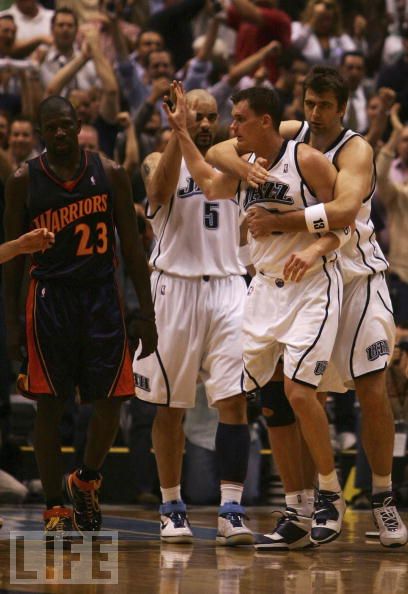 Maybe if Bogut had gotten a little more support, things might be different,