Congratulations to Ronnie Price for entering the UVU Hall of Fame last night.  From listening to Randy Rigby on the radio, D-Will, The KOOF, and others traveled down for the ceremony.  Here's the video clip,

I have to say that even if he was bald, I still don't think his plaque looks like him, 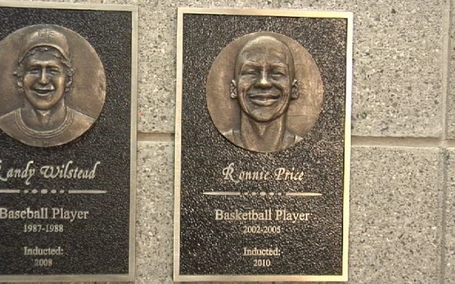 With his beard, he could become the gambler.

Kind of weird, I was trying to find Paul Millsap's website.  I looked up http://pmillsap.com which is where it was, but doesn't look like anything is there now.  So I tried http://paulmillsap.com just to see who owned it.

Oddly enough, it redirects to the law firm that represented Chris Bosh in his cyber-squatting case.  It looks like The KOOF and Ronnie Price were also affected.  I wonder if they've contacted them about getting the domain back.

Great podcast from TNLP.  Their podcast is called the Chronicles of Crotty after John Crotty.  Well, for their first anniversary, they bring the man himself on the show and he talks about a few things but also talks about playing behind John Stockton.

A lot has changed of course.  He was scoring a lot more last season with all of the injuries.  Since he's not going to be scoring as much this season with everyone healthy, let's look at his FG% as a measure.  When Memo shoots over 50%, the Jazz are 12-3 (.800).  That's a nice number.

If we're going to pass the Memo 15 on to someone else, let's give it to Wesley Matthews.  If he scores 15, tthe Jazz are undefeated  That's some sweet action.