Getting Ready For the Nuggets/Jazz

Share All sharing options for: Getting Ready For the Nuggets/Jazz

I talked about the best and worst case scenarios when the Jazz play Denver tonight.  They could either just be a game back with a win or find themselves 4 games out with a loss.

Well, there was also some middle ground there as well.  The Nuggets beat up on LA last night in LA.  Chauncey Billups specifically went off for 39 points including 9/12 from downtown.  Of those 9, 7 came from the top of the key or to the right side.  I didn't watch the game, but I'm guessing that a lot of those came on picks.  Let's hope he's cooled down a bit for tonight.

It wasn't just Billups either.  The team overall shot 57% and were 15/22 from downtown.  That's going to sink most opponents.  JR Smith had 27 and Ty Lawson helped abuse the LA point guards with 13 of his own.

Oh yeah, and Carmelo was out.  He'll be out tonight which never hurts.

Of course, both Billups and Melo were out last time the Nuggets visited the ESA and they still won. Lawson ran rampant and has burned the Jazz ever since with 17 points a game.  Come on Ty, it's not like we passed on you in draft or something, you don't have to play angry.  If we had drafted you, you would be in OKC right now anyway.

Part of the reason for the loss at the ESA earlier this season was the 25 turnovers by the Jazz.  Every other stat was equal or in Utah's favor.  Those turnovers led 11 more field goal attempts by the Nuggets and when shooting 50%, that was the difference in the game.

That lone loss in the 11-1 run by the Jazz is to the Nuggets in Denver.  The Jazz had 20 turnovers in that game that didn't help.  The back-breaker in that game was the 49, yes 49, free-throw attempts by the Nuggs.  They made 41 of those to the 20 that the Jazz made.  Amazingly, we only lost by 7 in that game.

So the key to tonight's win?  Limit turnovers.  That's it.  The offense it clicking and they'll get their points.  The Nuggets are an average team defensively but are 2nd in the league on the offensive side over the course of the season.  Other than the Cavs and Jazz, only the Nuggets can claim to be playing as well as anyone else in the league lately.

The Nuggets have already taken the season series, so there's no chance for a tiebreaker should the two teams end the season with an identical record.  The Jazz aren't just playing for pride though here.  Like I mentioned before, this is the last chance for the Jazz to gain on the Nuggets in the standings directly.  After tonight they'll have to count on other teams beating the Nuggs for them.

Boozer is back tonight.  I don't expect a major disruption here.  The Jazz were playing well both before and after he got hurt.  He'll get plugged back into the system and away we go.

Deron is back sans beard. 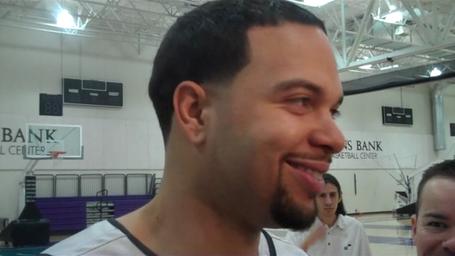 If the Jazz lose tonight, the beard better come back and stay for the rest of the season.  I'm wondering if he shaved it to do his got milk? spot that's coming out.

Deron and Boozer have both traditionally had big games against the Nuggets.  While AK will always be the X factor, we'll need Memo to be the Y factor in tonight's game.  We need to Memo from the last game to show up tonight.

The ESA should be rocking.