I found a sneak peek of Deron's got milk? campaign, 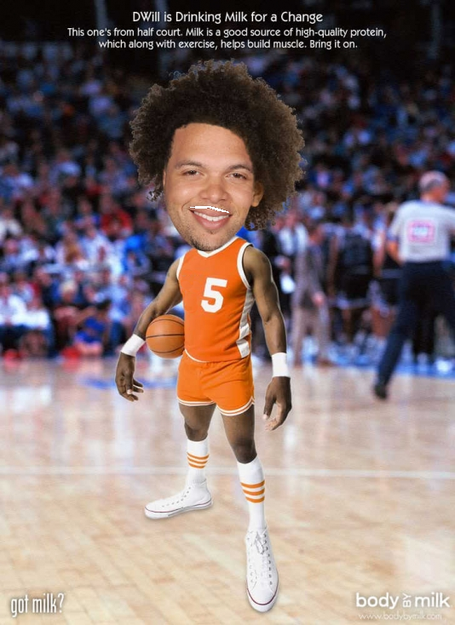 The real one should be coming out soon.  It looks like Billups and Paul already has theirs posted.

I would like to hear Stern's rationale for picking Chris Kaman for the All-star game.  First of all, Kaman doesn't deserve any flak.  He's had a good season and he doesn't have any control over who gets picked.  So you can't blame him.  Obviously, he's not going to turn it down.

But whether it was Boozer, Tyreke Evans, Andruw Bynum, or Marc Gasol, there are probably some more deserving players.

If you missed the Hot Rod half-time festivities, The Utah Jazz Blog has them up on his site.

Some info on the person waving the Turkish flag at the Portland game for Memo from the person himself,

Muzaffer Pekmezci | 8:30 a.m. Feb. 4, 2010
I was the person who waved Turkish flag throughout the game to support Mehmet Okur yesterday. I just came to Salt Lake City from Istanbul, Turkey to watch him. (app.20 hours by plane from Istanbul via Chicago) and I think it worthed to travel this long trip.
Mehmet was excellent. Should I come to SLC for every game?

I didn't see any of you flying to Turkey to go see Dee Brown play!  If that flag waving is what it takes to get Memo to play the way he did, then the Jazz need to hire this guy.

Come on moni, you're next.

Thanks to the boys at the Cowhide Globe for finding or uploading the video of Matt interviewing Deron.  Honestly, I don't know if I've seen this level of candor before from Deron.  He's joked with reporters and such in the past but for the first time I've seen him in a situation like this, he doesn't look annoyed.  He's pretty open about things too.

I imagine if this interview had taken place a month ago it might be a bit different.