I don't know why I've never noticed this before, after all, it's right there in his name.  I present, emo Memo: 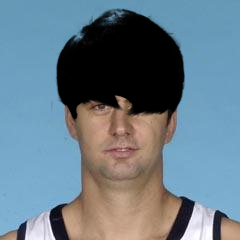 In the East, the 1 and 2 seeds are set.  Boston and Atlanta are jostling for the 3 and 4 seeds.  The other five teams are trying to avoid Cleveland while Chicago is trying to just hang on to the 8th spot.

Meanwhile, in the West, only the Lakers are set with their seeding.  From 2-8 there are only 3 1/2 games separating the rest of the pack.  San Antonio, Portland, and OKC are essentially tied for the 6-8 spots.  It's not likley that they'll pass one of the teams above that group with only 8-10 games left, but it's definitely possible.

With the exception of Denver, everyone is playing really well right now.  I think I've said it in the past but I think any team in the West could probably beat any other team right now in a seven-game series.

It almost makes these last 10 games or so a mini March Madness, only it's in April.

The Jazz will be able to kill two birds with one stone tonight if they can take out the Knicks.  They'll move up a bit in the standings with a win of course and give themselves a little better chance at winning the lotto come summer-time.

New York is on a five-game road trip out west.  They're probably going to be the underdog in the rest of their games this season with the exception of games against Golden State and Washington.  Only 3 of their last 10 are at home as well.  So they could finish pretty poorly.  But now that I've written that, they'll go 9-1 or something.

The New York Daily News also has this tidbit this morning,

The case could be made that the Knicks have more to gain from losing and thus ensuring that Utah gets a higher pick. The alternative is having a conference rival - Chicago, Philadelphia, Indiana, Detroit, New Jersey - getting the top pick, which could be Kentucky freshman John Wall.

I doubt they're going to tank because of that though.  That's probably the last thing on their minds. They also mention that the Knicks can't finish above tenth-worst in the league and could go as low as sixth-worst.  That's a pretty good sweet spot for the Jazz especially where we won't have a late first-round pick of our own.

Looks like AK strained his calf muscle in another location after the other one had healed.  Looks like you can get them from not warming up enough or even from dehydration.  The other thing that article points out is that you can get them from what's called overpronation or supination.  That means that when he runs, AK might be rolling his feet outwards, putting extra strain on his calf.  It states that you can check his sole of his shoe to see if the outside is worn down.

It kind of seemed harsh at the time when a fan called out CJ's poor play last month.  CJ had a pretty heart-felt response.  Maybe some tough love was just what he needed?  The very next game he went 4-5 from the field.  And in March, all of his numbers are up including assists, blocks, and rebounds.  It seems as though the team-minded CJ has led to an increase in offensive output.  With his drives to the rim lately, he's transformed a bit into a different type of player.  Maybe we all owe that fan a big thanks.