I'd like to welcome sirkickyass.  Some of you may know him from various other parts around the Jazz interwebs.  He used to run HarpringSuck.com and decided that a degree would be more important.

So instead of starting that back up again, he'll be writing here. His first post on CJ is up.

After Sundiata Gaines got pulled from nowhere for the last time we needed a 13th man, your guess is as good as any concerning who's going to get signed tomorrow.  However, KOC has said they prefer a vet, so don't look for a D-League callup this time around.

Give that it won't be a PG, it likely won't be a wing, I'll put my money on Mark Blount.

I knew it was the beard!  Deron makes a cameo for Boom's beard,

I won't link to the site I got this from because it's a personal blog, but here's Memo's custom license plate on his Ferrari, 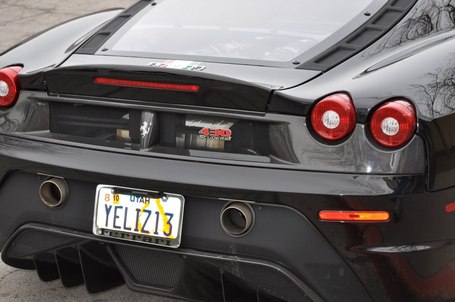 Thanks to bvanwagoner for the tip on this Matthews story on True Hoop.  If anything has softened the blow of losing Brewer, it's the play of Matthews.  KOC has said in an interview that Brewer would not have been traded had it not been for the  solid play of Wesley.  That's what makes this part from TH's piece a little heart-breaking.  Here he is talking about the Brewer trade,

Everybody was mad," Matthews says. "I was mad and I benefited the most out of it. Brewer was like my older brother. We still talk every day. He took me under his wing as soon as I stepped foot here in Utah."

I'm sure someone here has had the unfortunate job of training their replacement.  In this situation though, I'm sure Brewer had no idea and I'm sure that wasn't the goal starting out the season either.

I hope Matthews puts it behind him, if he hasn't already, if he has felt guilt about Ronnie B getting traded.

And he would even be on the team had it not been for injuries to Matthews and Korver at the beginning of the season.  That's not to say that he was gifted a spot because he's earned his starting role in every way.  But he has been the beneficiary from some big breaks in injuries and now the Brewer trade.  Like I said though, he's earned every bit of it.

Who knows, maybe his continually improved play will result in us forgetting all about Brewer.