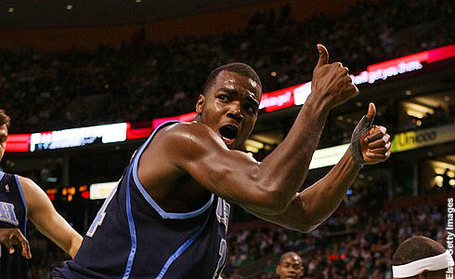 Paul Millsap isn't going to win the 6th man of the year award. Just like anyone who isn't Lebron James isn't going to win the MVP. But it doesn't mean that Millsap, or Durant, or Kobe Bryant aren't very strong candidates for their respective awards: Durant for MVP and Kobe for biggest D-Bag in the league. I can't pass up a chance to take a potshot at the Lakers. Yucca Man already put up a great post on Millsap's claim to the sixth man, but I intend to elaborate a bit

Like I said earlier: if you don't have Atlanta's Jamal Crawford or San Antonio's Manu Ginobili as your sixth man of the year, then you are just being a homer or else you don't like Ginobili or Crawford. They are both electric scorers off the bench as well as being 4th quarter closers for their respective teams. But think about the role that Millsap plays for the Jazz.

Paul Millsap not only doesn't start, but he loses minutes

With Carlos Boozer's return to the team and his good health, Paul Milsap has lost his starting spot and also 3 minutes of playing time a game compared to last season. But it goes even further than that. If you look at guys like Manu Ginobili and Jamal Crawford, they play starter minutes. Crawford is the Hawks' sixth man, but he gets the 4th most minutes of any player on the team and plays over 31 mins a game. Ginobili plays the 5th most minutes on the team, but he only gets 3 less minutes than Tim Duncan who logs the most minutes per game. Both guys play significantly more minutes than the guy they replace. Even JR Smith plays more minutes than Arron Afflalo. Paul Millsap on the other hand gets the 4th most minutes on the team, but he gets 7 minutes less than starter Carlos Boozer. And he only gets 3 more minutes than both CJ Miles and Wesley Matthews. So Millsap is closer to minutes of a bench player than a true starter. Last season a lot of Jazz fans, including myself, pointed to Carlos Boozer's return to the lineup as the main cause for the lack of chemistry and lack of wins to finish last season. But many Boozer supporters also speculated that Paul Millsap's disapproval of being sent back to the bench was just as likely the cause. It turns out that both theories were probably unfounded since Boozer has dealt with this season admirably and can even be considered a team leader with his yelling and laughing. But Millsap has never complained about not starting or having his minutes cut. He has never said, "I'm a starter. Period." He has expressed that he thinks he's a starter, but it hasn't affected the team. Next year might be another story, but for now Millsap plays as well as he ever has and he does it without public complaint.

Millsap is an efficient scorer, he just doesn't launch a lot of shots

I included this point to exclude JR Smith from any serious 6th man consideration. Smith can come off the bench and propel the Nuggets to victory with his shooting. But I have also seen him cost his team the game with unclutch and ill-advised shooting as well. You must help your team win games if you are to be considered for any season award. You may not believe in +/- numbers, but over the course of a season they are very revealing. They obviously don't tell the whole story, but no stat does. Disregard them at your own statistical peril. Deron Williams leads the Jazz in +/-. Wanna guess who is number two? Millsap. You may want to argue that Millsap plays against the other teams' lesser players, but he gets almost all his minutes in meaningful situations. His per minute +/- is third on the team and his defensive +/- ranking is third best behind AK and Fesenko. Jamal Crawford doesn't affect his teams +/- as well as Millsap does, although Ginobili's is better. Manu's +/- is best on is team.

For a team that has had trouble defending the paint, Millsap's abiltity to challenge shots is a must. Along with Andrei Kirilenko, Milsap leads the Jazz in blocks. And in terms of getting a crowd ignited, Millsap's blocks rank high on the richter scale. I would put any great move by Deron, or a Korver three pointer, or a Boozer dunk in the same category, but it is hard to say which play gets the crowd more excited. Millsap doesn't do it on the offensive end like many 6th man candidates, but a 6th man has to be able to electrify a crowd and give the team a spark.

So don't be surprised or upset when Paul Millsap doesn't win the 6th man of the year award. But just rest assured that Millsap is one of the best and most pure 6th men in the NBA.