No surprises last night as Dallas killed the Clippers and the Nuggets took care of Memphis at home. The Clippers loss was a double-whammy as they were tied record-wise with NY and are now a game back. So that will clinch the 9th spot for the Jazz come lotto time.

I can't believe the Clippers are going to be able to damage another lottery pick.

We'll learn a lot more about our playoff fate as the Suns will be hosting the Nuggets at the same time the Jazz are playing Golden State. Nothing like three teams scoreboard watching in-game.

Speaking of which, I mentioned before, that if the Jazz had been just over .500 in previous seasons on the road, they would have had one of the top 2 seeds. Even a 20-21 record would have done wonders for them. So tonight they can finish over .500 since the Stockton and Malone days and pending the outcome of tonight's games, get a shot at the 2 or 3 seed.

From that, it looks more like they just can't put it together in the same season. If they have a few more wins on the road, they've dropped a couple more at home. We have just the 8 losses this season with a couple (CLE, OKC) that we could have lost. There are some though that we should have probably won. So we're probably right where we should be at home.

Where am I going with this? I don't know. Maybe it's the obvious, more wins on the road=good for standings.

It's LOST night! It fits so well. It's DB #8. Deron wears #8. Thank goodness it's not the 15th. Sorry for those non-LOST fans. I really haven't talked about it as much as I could have this season. It's almost over though. 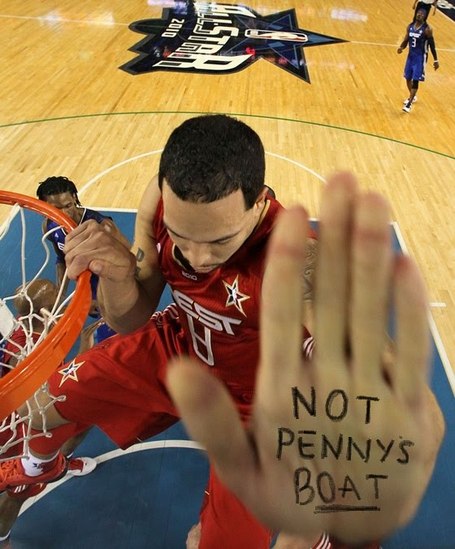 I tried to turn this into an interview with Deron but it looks like he's not doing them to promote this. Anyway, you can win an autographed ball from the Ninja (if I ever do get his autograph, I'm going to ask him to sign it with Ninja underneath) by going to the Body By Milk website and voting for your favorite campaign. Of course, Deron picked up a big endorsement deal over the All-star break from the got milk? campaign.

You have to be using twitter to do it though. Here are the complete steps,

A little bit of work, just it's just clicking.