Players aren't allowed to look ahead but we can. There's a long ways to go until the second round but I was watching the Thunder/Lakers game last night and OKC was this close to pulling one out in LA.

The one thing I wish the Jazz could emulate from OKC, besides having a Durant, is their confidence against LA. They don't have that mental wall that the Jazz have. The Thunder took it right at them all night and didn't back down. You could just tell from their demeanor that they weren't going to be inlfuenced. I mean, Durant was doing a dance in front of Jack Nicholson before the game.

We'll worry about who we face though if/when we get there.

Memo has a successful operation done on his Achilles. What amazes me is that he can start doing rehab on it in just a few weeks. I know he's not going to be running sprints and that it will start slow, it's just weird that it is healed enough by that time where he can start doing therapy, however small.

I guess it's good to keep him busy though. We don't need him laying around bored for a long time and then find out that Yeliz is expecting again. We all know how he plays when that happens.

Our other injured player, AK, had PRP (platelet rich plasma) therapy done on his calf. The details, according to Siler,

The therapy calls for Kirilenko to be injected in his injured calf with a concentrated amount of his own blood, which has been spun in a centrifuge to separate the platelet rich plasma, which is supposed to help accelerate healing.

At first I thought it sounded like blood doping but that's where they inject red blood cells to increase endurance and aerobic ability.

According to Siler, both Brandon Roy and Kenyon Martin both had this done. While it's possible that AK could return in the second round, having three of these on the same calf makes me wonder if he's just prone to them now. While I would kill to have him out there I don't know if I can take him going down again.

We haven't talked about it, but it was clear that Miles stepped out of bounds before Melo fouled out.  The Jazz were up one at that point and I'm surprised that this hasn't been talked about more.  I thought he was getting pushed out which would have been a foul anyway.  The guys at DenverStiffs were kind to point out the the reason the ref missed that was because he had his eyes closed, 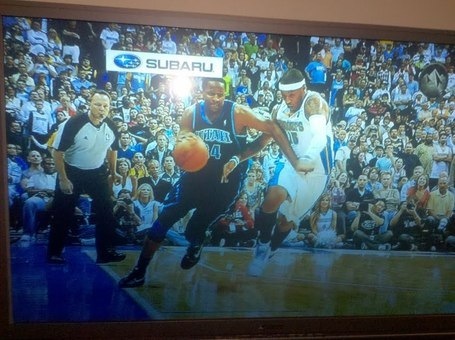 I maintain that had the flash not gone off then the ref wouldn't have been blinded :).