Share All sharing options for: The Downbeat - 22 April 2010 - #213 - The This Is What You Get With Four Days Between Games Edition

Talking to reporters for the first time since he strained his left calf yet again, Andrei Kirilenko said Wednesday he was holding out some hope of returning for Game 6 or Game 7 of the Jazz's series against Denver, if they prove to be necessary.

Kirilenko, who traveled to Los Angeles to receive platelet-rich plasma therapy for his calf on Monday, called it "probably highly unlikely, but it's a good goal" as far as trying to return before the end of the first round.

Hopefully we can advance without AK.  I would hate to see him come back and get re-injured before when we would really need him, against the Lakers (or even OKC).  However, maybe we need him back to get past the Nuggets?  It does seem like everyone is optimistic about him not re-injuring things though from his recent blood-letting.

Kevin Arnovitz has a great post about how the Deron Williams and the Jazz are beating the Nuggets.  His reasons are, No Answer For Deron Williams, Utah's Cutters Are Having a Field Day, and Nuggets Defenders Are Doing a Poor Job Off The Ball.

It's a great read if you haven't done so already.

It's nice to see Korver shooting well again from the arc.  He struggled a bit coming down the stretch but in two games so far, he's 3/5. 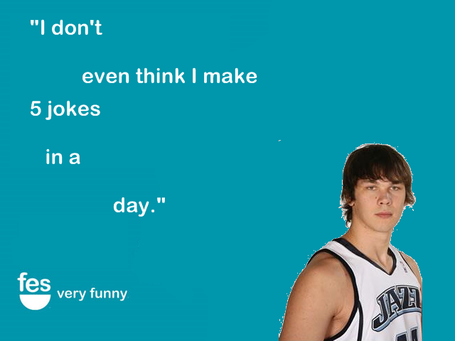 What's weird about AK going to adidas is that just last month they had custom Shox released for him.  I tried to find a link between new Nets owner,  Mikhail Prokhorov, and adidas somehow but to no avail.